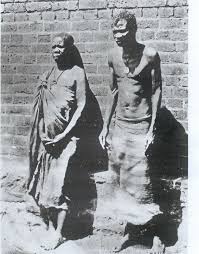 The skulls of Zimbabwe’s early freedom fighters, Mbuya Nehanda and Sekuru Kaguvi, alongside 25 others, are expected to be repatriated from Britain in April.

This was revealed by Colgan Zendera, who is the reigning Chief Makoni while speaking to reporters at the Zanu PF headquarters on Thursday. He said:

It has been close to 40 years after we attained our independence and we still haven’t brought back the skulls of our icons and our culture rightly says if a person dies or is killed in a native land that person can only rest if the body and soul have been united with their roots.

… we are very grateful that the repatriation process is now ending and very soon, we would have brought back the remains of our ancestors so that we can reunite their skulls with their roots because they belong here.

Mbuya Nehanda and Sekuru Kaguvi were hanged by the white settlers in 1898 for having masterminded the First Chimurenga.

Their remains are being kept as souvenirs at the Westminster Abbey and the National History museums both in London.