Suspended leader of the ZANU PF Youth League, Godfrey Tsenengamu has said that he would only go to Hebert Chitepo Ideological College as a lecturer and nothing less.

His remarks come after his suspension from the party and recommendation that he, together with Lewis Matutu whom he was suspended with, be rigorously trained at Hebert Chitepo Ideological College before they are readmitted into the party.

The suspension came after they had named and shamed Kuda Tagwireyi, Sakunda Holdings boss as one of the individuals who have been using President Emmerson Mnangagwa’s name to do their underhand dealings which are choking efforts meant to revive the economy. 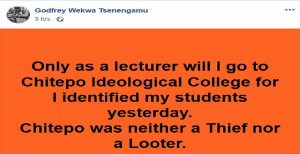