A passport seeker has today revealed that Registrar General’s office is charging an additional ZWL$200 on top of the $53 to expedite the production of passports.

The source said that the top-up is for the passport to be issued after three working days instead of the initial six (6) months.

Some have however revealed that the top-up was introduced on 14 November 2019 when the queue of passport seekers had become approximately 1km long.

The development after Home Affairs Minister, Kazembe Kazembe recently suggested that passport seekers may have to apply online to quicken the application process.

Kazembe also said that the Registrar-General’s office has to clear off the passport backlog which dates back to 2018.

The office is overwhelmed by demand and is performing below capacity due to a huge deficit in foreign currency which is requisite for the procurement of consumables needed for passport printing. 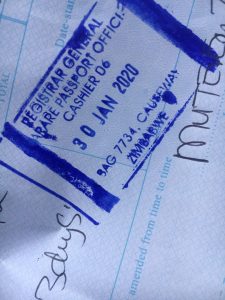