The opposition MDC Alliance has in its Agenda 2020 document reiterated that the 2018 presidential elections were manipulated in favour of the ruling ZANU PF’s candidate, now president, Emmerson Mnangagwa.

The party said that new evidence makes it possible and necessary for the party to approach the African Court on Human and People Rights over the manipulation of the election.

We present below an excerpt from the document.

While the Constitutional Court made its determination of the application I initiated challenging the controversial ZEC declaration and announcement of Mr Emmerson Mnangagwa as the winner of the 2018 presidential election, and while we respected that decision as we disagreed with it, there is now a new development after the case. The development is coming from ZEC itself, which shows beyond any argument or doubt that the results of the 2018 presidential election were transmitted, captured and collated unlawfully, improperly and irregularly as to void the election and invalidate any result that was declared and announced following the unlawful, improper and irregular transmission, capture and collation of the results from the country’s 1,985 ward centres to ZEC’s national command centre in Harare.

The compelling evidence of how the presidential election was rigged by ZEC, is enough for anyone and all of the 2,6 million voters who cast their vote for us to go to court on grounds that their political rights enshrined in s67(1) of the Constitution were violated. There’s also now a clear and present basis for taking the matter of the 2018 presidential election to the African Court on Human and Peoples Rights. Such actions would be well within the BBI, as an expression of the people’s action to restore legality and legitimacy under the MDC’s Agenda 2020.

Those who say the 2018 presidential election should be forgotten about, and focus should now be on 2023, ain’t seen nothing yet. It’s them who should forget about covering up the giant 2018 election fraud. Especially now that ZEC itself has, perhaps inadvertently or even mischievously, came out with incontrovertible evidence that election was not conducted in substantial compliance with the law. 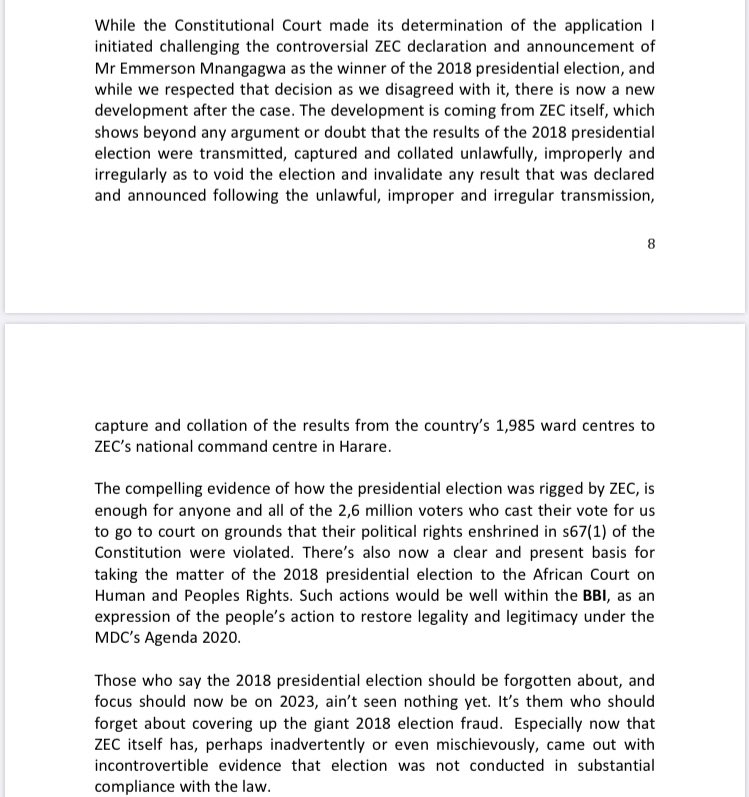 3 comments on “FULL TEXT: “Forget 2018 Presidential Election? Ain’t Seen Nothing Yet,” MDC To Escalate Matter To African Court On Human And People Rights”