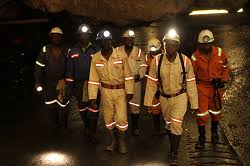 Zimbabwe’s military is considering pulling out a joint mining venture with a Chinese firm, Wanbao Rexco.

The Zimbabwe Defence Forces (ZDF) and Wanbao Rexco are partners in Global Platinum Resources (GPR), a company formed in 2004 to exploit platinum resources along the Great Dyke.

Under a 2008 deal between the government of Zimbabwe through the ZDF and Wanbao Rexco, it was agreed that Harare would get firearms from the Chinese in exchange of platinum resources.

We are fed up with Wanbao Rexco since they came here in 2004 employing their own people and exploiting the country’s platinum resources for absolutely nothing, we can’t accept that.

It has suspended the operations until now [2020, a year which it said it will begin real mining] because we refused them to continue more feasibility studies after we realised that the pre-feasibility study they carried out cost US$25m against our feasibility study which cost US$15m which mainly comprised of local personnel.

Business Times could not get a comment from Wanbao Rexco official as their phones went unanswered.