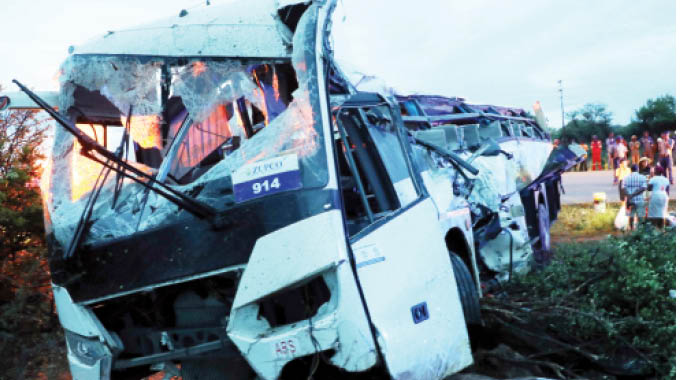 Police have named two of the three victims of the Zimbabwe United Passenger Company (ZUPCO) bus accident which occurred near Bulawayo on Tuesday.

Matabeleland South Police spokesperson Chief Inspector Philisani Ndebele revealed that 21 people were injured in the accident and are admitted at the United Bulawayo Hospitals (UBH). He said:

Police have identified two of the deceased as Ben Moyo and Bhekimpilo Moyo whose ages were not given. Both are from Bulawayo. We are yet to identify the other body of a female adult passenger.

The accident happened at about 4.45 pm. Our preliminary investigations reveal that the bus was speeding on a slippery road.

The ZUPCO bus was travelling to Bulawayo from Beitbridge when the accident occurred at the 25km peg along the Bulawayo-Gwanda Road near Chipangali Wildlife Orphanage.

Passengers and eyewitnesses concurred that the driver of the bus was speeding as the vehicle approached a sharp bend causing it to veer off the road and overturn.