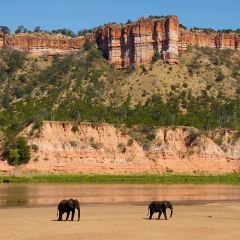 Gonarezhou Director of the Conservation Partnership, Mr Hugo van der Westhuizen has expressed concern over the current dry spell currently being experienced in most parts of the country, Newsday reports

Speaking to Southern Eye, Mr van der Westhuizen said pasters were fast dwindling and water bodies were slowly drying up and his major concern was the effect of such a situation on larger animals:

If the drought spell continues, we will be in a dilemma because pastures are fast dwindling and water bodies slowly drying up. Although every animal will be affected; the most affected will be larger animals like elephants.

During the dry season, over 100 elephants died at Hwange national park mainly because of the water shortage.