A Blue Ranger bus operating the Joburg to Gweru/Kwekwe/Kadoma route has reportedly been involved in a head-on collision with trucks this morning near Louis Trichardt in SA.

Witnesses say a police car flagged down a Quantum in front of the bus and the driver pf the Quantum then instantly braked, a development which forced the bus driver to also brake instantly to avoid hitting the Quantum.

The bus then swerved leading to a pile-up with some haulage trucks.

Details relating to the condition of passengers are still sketchy. 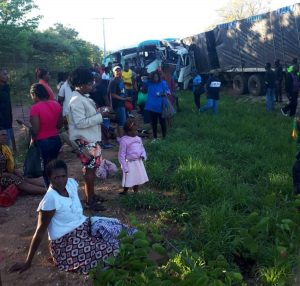