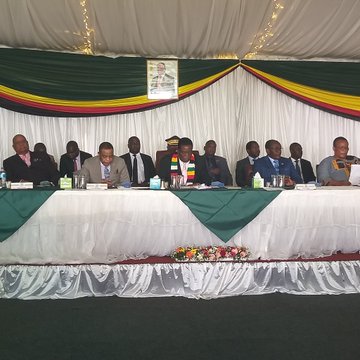 Reverend Nehemiah Mutendi has disowned a statement by the Zimbabwe Heads of Christian Denominations (ZHOCD) calling for a seven-year suspension of elections.

Speaking at State House on Monday where he met President Emmerson Mnangagwa alongside other church leaders, Mutendi said the spirit of God has always been present ever since Mbuya Nehanda prophesied the revolution that would liberate the country.

Some of the churches that attended the meeting are ZAOGA, ZCC, Johanne Masowe, Jekemisheni, Bethsaida, African Apostolic Church (Mwazha), Johanne Marange amongst others.

Besides Mutendi, controversial founder and leader of the Family of God Church (FOG), Andrew Wutawunashe attended the meeting.

These fake pastors and regime sycophants are meant to distract us with their nonsense couched in bible verses!

Imagine a country with NO water to drink, electricity, fuel, medicines or working hospitals, jobs:

Its leaders spend days in these pointless meetings adding no value!

One Comment on “Church Leaders Invoke The Spirit Of Mbuya Nehanda”