The Zimbabwe Republic Police have issued a statement dismissing allegations that rubber bullets or live bullets were used by police in Marondera to disperse the MDC. The statement signed by police national spokesperson, Assistant Commissioner Paul Nyathi reads:

Allegations of live rounds being fired in Marondera.

The Zimbabwe Republic Police dismisses allegations that live rounds or rubber bullets were used or fired when Police Officers in Marondera dispersed MDC supporters and activists this afternoon who had illegally gathered at Dombotombo Clinic and some leaders attempted to address the gathering without following the laid down notification procedures in terms of the law.

Police only used tear smoke to disperse the gathering and politicians with some who had been transported in combis openly refusing to comply with orders which had been given by the police.

The facts on the ground are very clear on what happened. We urge members of the public and activists to comply with orders given by law enforcement agencies in their various activities in order to ensure that law and order is properly maintained by police without any hassles. 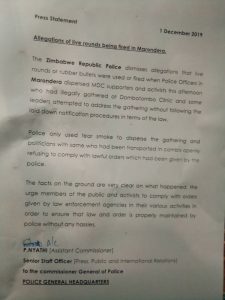