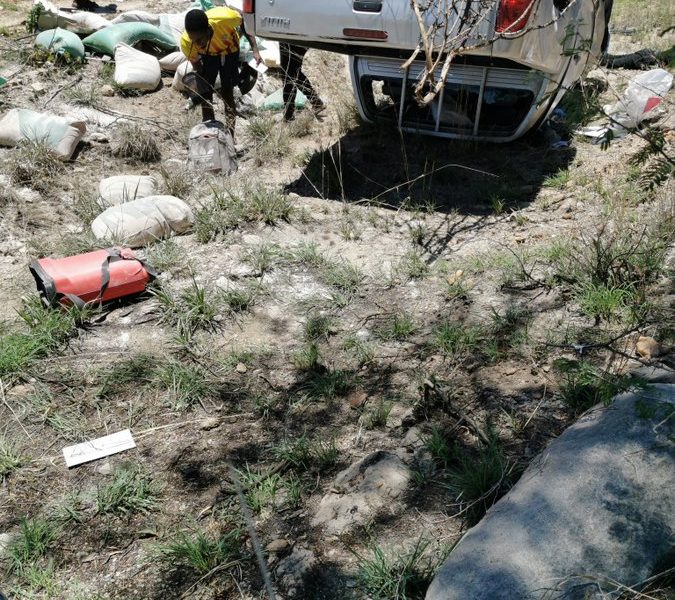 A car overturned after hitting a huge pothole about 20km from Chivhu along the Masvingo-Harare highway. Image Credit: @ali_naka

A prominent social media personality using the Twitter handle @ali_naka wrote about an accident that occurred along the Masvingo-Harare highway on Friday.

He exposes how Zimbabwe’s public health delivery system has collapsed under the so-called ‘New Dispensation’. Below is the full thread:

Citizens Stopped to assist road traffic accident victims along the Masvingo – Harare highway yesterday. They called Chivhu General Hospital for an Ambulance. They were told they had no diesel. ‘Please find well-wishers to assist,’ she said. 2 guys with trucks agreed.

They assisted the two very critical victims to the hospital. One of the victims had a clear head injury. On arrival, it became clear and sad. The hospital had no water, no power and had to improvise for a lot of basic things like catheters.

The reality was that the victims would ordinarily need a referral to Harare. The specialists in Harare have downed tools, the hospital they left them had no fuel to refer them and can’t deal with that level of injury. The other patient was at least conscious and on medical aid.

Medical insurance companies in #Zimbabwe will not release an ambulance unless your next of kin make arrangements to get a specialist and a hospital bed at a private institution!

That vehicle hit a crater-like pothole about 20km from Chivhu and driver lost control and that’s what caused the accident.

Mnangagwa is a FAILURE!