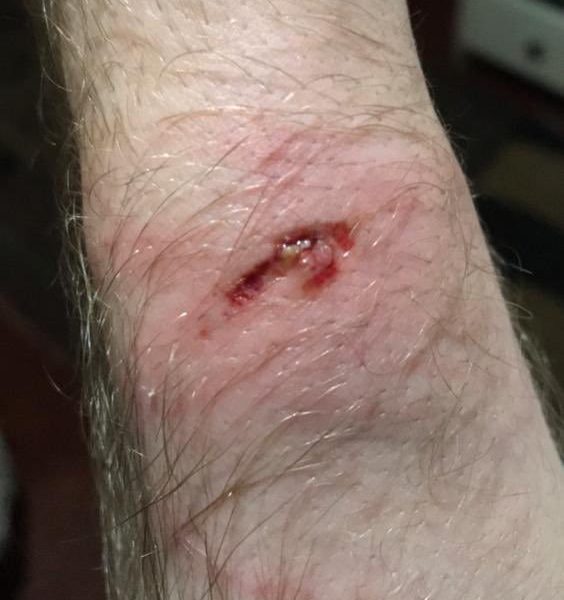 On Saturday afternoon the 23rd November 2019 my son Douglas Coltart was severely assaulted by some 6 members of the Zimbabwe Republic Police at Harare Central police station whilst representing the President of the Association of Rural Teachers of Zimbabwe (ARTUZ) President Obert Masaraure.

The following are the facts surrounding this incident. I apologise for the length of this post but is important to get the facts out in the public domain.

On 23 November 2019, Mr Obert Masaraure was in central Harare with his wife and their two sons (aged 7 and 3 years) to get a family photograph.

His wife was driving the family. Near the intersection of Robert Mugabe Way and George Silundika Avenue, Masaraure got out of the vehicle and sought to direct his wife into a parking bay. Some police officers approached them and accused his wife of blocking traffic.

Masaraure engaged the police officers and pointed out that there was no traffic and he was just directing his wife into a parking bay. One of the police officers identified him and indicated that he was wanted at CID Law and Order and at the Police Internal Security Intelligence department.

He was also advised that the police were now going to “fix” him. They let his wife and sons go, and took him to the police station.

At approximately 13.00, Douglas Coltart received a phone call from Masaraure advising that he had been arrested and detained by the ZRP at Harare Central and was requesting legal assistance.

Bamu arrived at Harare Central Police Station at 14.15 and went to the Operations Shed where Masaraure was being held.

As he was about to explain to police officers at the Operations Shed that he was a lawyer and wanted access to Masaraure, Bamu was intercepted by a visibly inebriated Chief Inspector (now identified as Chief Inspector Majongosi) who became aggressive and ordered Bamu to leave.

Bamu introduced himself as a lawyer and requested access to Masaraure. The Chief Inspector became even more agitated and shouted that the Law Society Practicing Certificate (which Bamu has shown him) gave no right of access.

Bamu refused to leave without either seeing Masaraure or of knowing the name of the arresting detail. The Chief Inspector then introduced himself as Majongosi and advised Bamu to access Masaraure through the cells as he was going to be lodged there.

Bamu then attended on the cell controller who advised that he could not assist as Mr Masaraure had not yet been brought into his custody. Having not had lunch Bamu decided to leave temporarily to get lunch and he phoned Coltart to advise him of this.

At approximately 15.00 Coltart arrived at Harare Central with food for Masaraure, having been briefed by Bamu by telephone and advised that the Chief Inspector was drunk.

Coltart had only just started taking instructions from Masaraure (who at this point had not yet seen a lawyer) when Chief Inspector Majongosi arrived in a belligerent frame of mind. He aggressively instructed Coltart not to talk to Masaraure and that he could only do so from the cells.

He advised that Coltart might as well meet Masaraure in court on Monday as he was definitely being detained for two nights. Coltart then advised Chief Inspector Majongosi of the dictates of section 50(1)(a) and (b) of the
Constitution and that his client had a Constitutional right to consult with a legal practitioner, without delay, and to be informed of the reason for his arrest at the time of his arrest. (As an aside section 50(1)(b) of the Zimbabwe Constitution states that “Any person who is arrested must be permitted without delay to consult with a legal practitioner of their choice and must be informed of this right promptly”).

Chief Inspector Majongosi refused to say why Masaraure had been arrested and threatened to forcibly remove Coltart. Concerned about the blatant violation of rights and wanting to gather evidence of it, Coltart attempted to record what was happening on his cell phone.

Coltart was then manhandled and forcibly removed by several police officers from the Operations Shed. Coltart advised Chief Inspector Majongosi that he was going to make a report to the Controller’s Office.

He was then dragged out of the Controller’s office by the group of police officers (in full view of the public at the Charge Office front desk) while the officer in charge at the Controller’s Office looked on and did nothing to prevent the ensuing assault.

Coltart was then dragged into a corridor away from members of the public, where he was assaulted by the group of police officers using boot-clad feet, shin-pads and batons for approximately 5 minutes.

He was thrown to the ground and kicked in his back and legs while lying on the ground. A boot was pressed to his head and neck, and his left hand was also crushed.

Handcuffs were placed tightly on Coltart and his hands, wrists and arms were then yanked causing deep cuts to his wrists.

Coltart was repeatedly denied an opportunity to phone his lawyer or a family member, until eventually when the other officers had left, one officer assisted him and allowed him to call his wife.

Coltart was handcuffed and detained for over an hour during which time he repeatedly requested that the handcuffs which were cutting into his wrists be loosened but the police officers advised that they could not find the key for the handcuffs.

(It is also important to note that Coltart has not yet fully recovered from his previous illegal assault by the police on 23 August 2019 as he still has a loss of sensation in his right hand as a result of damage to the radial nerve caused by overly-tight handcuffs on that occasion).

While he was detained, Coltart advised Majongosi that he would be suing Majongosi personally for the assault and illegal detention.

Eventually, it was agreed that if Coltart undertook not to sue Chief Inspector Majongosi he would be released without charge, and Coltart was then released from custody at approximately 16.30.

While Coltart was detained Bamu had been unable to locate him, but upon release, Coltart found Bamu and two other lawyers (Mr Mark Rujuwa and Mr Mzokuthula Mbuyisa who had come to provide legal assistance. Bamu and Coltart then engaged the police regarding Masaraure’s detention.

Chief Inspector Majongosi then advised that he would have let Masaraure go without a charge, but he had already been lodged in cells and could then only be released either to the court or upon paying an admission of guilt fine.

Access to him was granted at around 17.00hrs, at which time Mr David Drury and Ms Emma Drury had also arrived. Bamu and Coltart then asked the police what charges Masaraure was facing.

They were advised that he was facing charges of “disorderly conduct”. On being pressed regarding what facts the police were relying on they stated that it was alleged that Masaraure had said to his arresting police officers “this is pure harassment – you guys are just being used by politicians”. Apparently, that was considered by the police to be an element of the offence.

Notwithstanding the lawyers’ representations to the police that the charges Masaraure was facing were baseless they were advised that Masaraure would be held in detention over the weekend and brought to court on Monday the 25th November unless he paid an admission of guilt fine.

Bamu and Coltart consulted with Masaraure who advised him that his children (presently aged 3 and 7) have been seriously traumatised by witnessing his arrest, especially following his abductions twice this year (on 18 January and on 6 June 2019) from their family home.

Masaraure advised that he desperately needed to get out of detention so that he could return to his wife and children to console them. Initially, police said the fine would be ZWL$40 but upon making payment it was increased by the police to ZWL100. Masaraure was finally released from custody at approximately 18.45.

After securing Masaraure’s release, Coltart then sought medical attention. Coltart suffered the following injuries as a result of the assault:

Coltart has been treated and full medical report will be issued in due course. Photographs of his injuries are attached below.

The assault of a Legal Practitioner acting in the course of his professional duties is unacceptable and a serious breach of criminal law and the Constitution of Zimbabwe.

In the normal course of events, such an assault would result in the suspension and possible dismissal of the police officers involved, upon being proved guilty of the offence.

In Zimbabwe police officers in the last few years have been guilty of far worse assaults on civilians than the one perpetrated against Coltart.

For example, the assaults by police officers of innocent old men and women in central Harare on Wednesday the 20th November 2019 resulted in far more serious, potentially life-threatening, injuries being inflicted on victims.

Not a single police officer has been suspended or charged for numerous unlawful assaults on civilians during the last few years.

There is no doubt in my mind that this has contributed to the events of this last weekend where the police clearly feel that they can assault Legal Practitioners at will, without any fear of retribution.

The Law Society of Zimbabwe has clear obligations in terms of section 53 of the Legal Practitioners Act to “deal with all matters affecting the interests of legal practitioners” and “to represent the views of the legal profession and to maintain its integrity and status”.

It also has the implicit obligation to protect the Constitution of Zimbabwe and to ensure that its provisions relating to the rights of accused persons vis a vis their interaction with Legal Practitioners are scrupulously followed and complied with.

In my view, the Council of the Law Society of Zimbabwe urgently needs to take strident action in this matter.

I should stress that whilst I am obviously an interested party, as Coltart is my son, I believe that if this assault is not dealt with there is a danger that the profession as a whole will be undermined.

Both of these assaults have been committed whilst a lawyer was representing his clients. If this is allowed to past uncensured no lawyer will be safe to represent clients in future.

If the police can wantonly and grievously assault Legal Practitioners, in flagrant breach of section 50 of the Constitution, then all Zimbabweans will be made even more vulnerable to the growing abuse of law and depredations of the Zimbabwe Republic Police.

My concern goes way beyond the narrow interests of my son. If this breach of the law by the police is not dealt with it will have a chilling effect on young lawyers seeking to protect their client’s interests and rights in terms of section 50 of the Constitution.

Young lawyers, particularly in remote police stations, will fear that policemen will be able to assault them with complete impunity if they try to uphold their client’s rights in future.

I should also mention that in my 36 years of legal practice in Zimbabwe I have never heard of any lawyer who has been assaulted trying to represent his or her client. This conduct of the police is accordingly a serious deterioration in Zimbabwe’s human rights situation.

It is also incumbent on churches, civic groups and the international community to speak out against this vile conduct. Zimbabweans are rendered defenceless by an increasingly rogue police force and if the international community, in particular, does not act against this conduct the culture of impunity within the security forces of Zimbabwe will grow.

This, in turn, will result in all Zimbabweans being rendered ever more vulnerable and abuses of fundamental human rights will escalate.