President Emmerson Mnangagwa has said that it is essential and necessary for Zimbabweans to work towards the establishment of a peaceful, more equal and violent-free society.

Posting on Twitter on Monday, a day set aside as to champion the fight against violence against women and girls internationally, the president said:

Today is the International Day for the #EliminationOfViolenceAgainstWomen.

We must all strive for a more equal & peaceful society, where violence has no place. In Zimbabwe, we are working hard to protect women from violence, to eliminate this evil phenomenon once & for all.

Some observers and critics claimed that he was not being sincere since he never castigated violence against opposition MDC supporters by state police.

Reports suggest that when the police violently dispersed MDC supporters from the party headquarters in Harare on Wednesday, a number of people sustained serious injuries with one woman reported to have broken her leg. 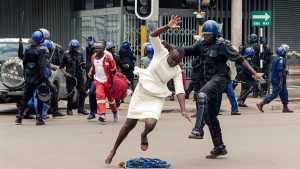 One Comment on ““We Must Strive For A More Equal And Peaceful Society,” ED”