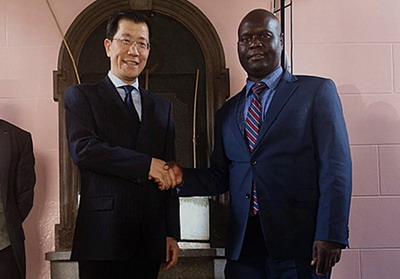 （From Chinese Embassy in Zimbabwe）

Ambassador Guo said that the traditional friendship between China and Zimbabwe has grown stronger with the passing years and both sides have given each other firm support on issues concerning sovereignty, security and development interests.

Harare is the political, economic and cultural centre of Zimbabwe and an important participant in China- Zimbabwe cooperation in various fields.

China has assisted Harare in upgrading its municipal water supply capacity and building schools. We sent a cultural and art delegation to participate in the Harare International Cultural Festival last year.

The Chinese embassy in Zimbabwe is ready to strengthen cooperation with the Council of Harare Metropolitan City to jointly push forward the cooperative projects and make Harare more livable and modernized.

Mr Gomba said that the Council of Harare Metropolitan City appreciates China’s strong support and cherishes its friendship with China. For a long time, China has provided Harare with substantial assistance and support on various occasions.

Many enterprises have invested in Harare promoting economic development and bringing tangible benefits to residents.

The city is considering to establish a twin-city relationship with a Chinese city, continuously deepening cultural exchanges and friendship between the two peoples, and promoting bilateral relations to a higher level.

After the meeting, Ambassador answered questions from local journalists at the meeting.