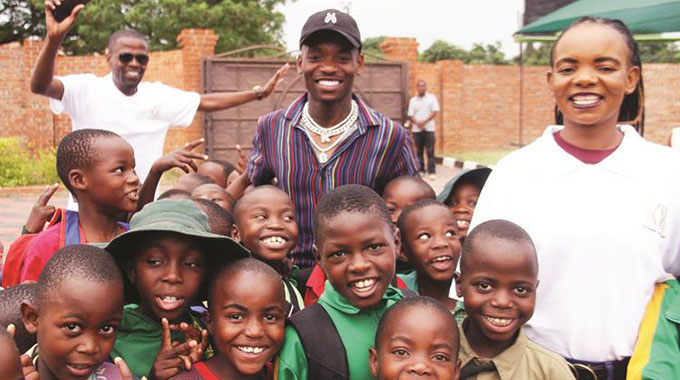 Zimbabwe international football star Khama Billiat and his mother, Rosa, pose for a group photo with pupils from Gwinyiro Primary School in Mufakose

Warriors and Kaizer Chiefs winger, Khama Billiat, flew in from Johannesburg with the members of his Foundation to donate various goods to his former primary school, Gwinyiro, in Mufakose, Harare.

Billiat donated goods worth 100 000 Rand on Tuesday before joining the Warriors at their first session in the afternoon. Speaking to reporters about the donation, he said:

I was giving back to the school that l went to. I brought some sanitary pads, soccer kits, netball kits.

It took long for me to do it, I don’t know why but I thought, maybe, I would do it with the Khama Billiat Foundation.

… I found it proper for my team to fly this side and do it here while I am in camp. It is not about soccer only, we just want to try and help as much as we can.

Billiat was born at Mufakose Clinic on August 19 in 1990. He did his Grade One at Marimba Primary, and in 1998 he started Grade 2 at Gwinyiro.