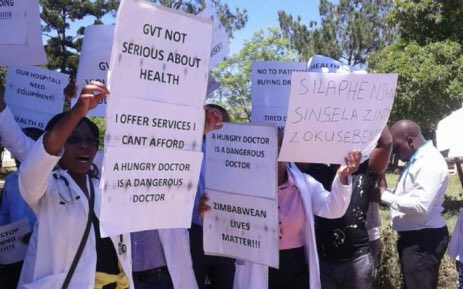 Amalgamated Rural Teachers Union of Zimbabwe (ARTUZ) marked the 24th day of the job action for a living wage by collaborating with other Public Workers’ Trade Unions and staged a historic protest against the Ministry of Finance and Economic Development.

The protest action is a direct response to the erosion of workers’ salaries by the skyrocketing inflation due to the unstable macro and micro-economic environment which has resulted in the plummeting living standards of teachers and all civil servants alike over the last 2 years.

The protest was called for by the Apex Council after ARTUZ had organized an indefinite job action which commenced on 14 October 2019, alongside all other affected civil servants.

The protest was designed to end the impasse between the government and its workers who are now incapacitated and can no longer execute their duties nor attend to their workstations at all.

Police clearance had been granted for the handing over of a petition to the Public Service Commission and the Ministry of Finance.

Thus a procession of all the Public Sector Unions was intended to proceed to the offices of the Ministry of Finance which is headed by Prof. Mthuli Ncube. However, as the protest had gained momentum, the ZRP came in full force and illegally barricaded both sides of Livingstone Avenue.

This prompted ARTUZ President Obert Masaraure and Secretary-General Robson Chere to lead the protestors to face the police and go past the barricade as there was no basis at law for the police to stop the exercising of the right to assembly and petition.

This resulted in the ZRP resorting to its heavy-handed tactics and with maximum force manhandled the ARTUZ leaders and membership. ARTUZ officer Tryvine Musokeri was the most affected as he was brutally dragged away by 6 armed policemen.

This behaviour from the government and the brutality by the ZRP is once again a clear demonstration that the Government of Zimbabwe has no desire to sincerely engage with its workers.

Further, it corroborates the recent findings of the UN Special Rapporteur on Freedom of Assembly Association which found that the Government of Zimbabwe grossly violates labour rights using the security forces.

Moreover, it flies in the face of the ILO convention and declarations on the right to petition by workers for which Zimbabwe is a party. ARTUZ remains resolute in its fight for a living wage of USD $475.00 as per the 2012 salary awards. Our force will not abate and our strength will never wane, we shall fight on!