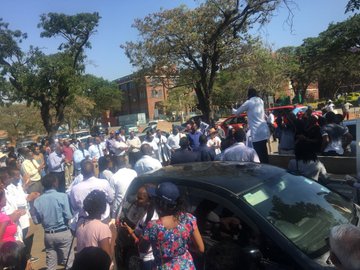 Striking doctors are adamant that they will not attend the disciplinary hearings which are scheduled to commence on  Friday, November 1 after they ignored a court order to return to work earlier this month.

In an interview with Health Times, Zimbabwe Hospital Doctors Association (ZHDA) secretary-general Dr Tawanda Zvakada said no doctor will attend the hearing since they are not involved in any form of misconduct. He said:

We believe we have not committed any misconduct by demanding a fair living wage. No one is attending any hearing.

On Tuesday, the Minister of Information, Publicity and Broadcasting Services, as the Acting Minister of Health and Child Care told a post-cabinet media briefing that the striking doctors who did not comply with the Labour Court judgement have already been served with disciplinary hearings papers.

Mutsvangwa added that salaries will only be paid to doctors who were back at work.

3 comments on “Striking Doctors Vow Not To Attend Disciplinary Hearings”