Bulawayo civil servants have been ordered by the govt to attend the anti-sanctions day march without fail as there will be a register for accountability purposes. This came to light as a picture to that effect went viral on social media.  The letter reads:

The above subject refers

Bulawayo will join the rest of the Nation in the Anti Sanctions March that will be held on the 25th of October 2019. On this day the whole of SADC will be in solidarity with Zimbabwe calling for the removal of illegal and unjustified sanctions imposed on Zimbabwe by some Western Nations.

There will be three points from which the marches will generate from in Bulawayo towards the White City Stadium that is from Mpopoma robots, Pelandaba robots and Westcomm robots.
It is against this background that you and your members of staff are invited without fail to be part of this very important March. May you kindly favour this office with a list of your members of staff for ease of accountability by Friday the 18th of October 2019.

Your participation is anticipated, 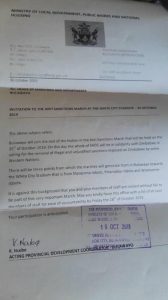