The striking doctors have dismissed the notion by the government to appear for disciplinary hearings over their continued strike.

In their response to the govt dated 23 October 2019, doctors said they had not committed misconduct by demanding a fair wage. and they were not be able to attend the misconduct hearing. Check the letter below: 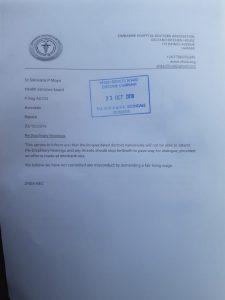 Doctors have been on strike since 3 September and have ignored all calls from the government to return to work without their grievances being addressed to their satisfaction.

One Comment on “Doctors Dismiss Misconduct Hearings Instituted By The Govt”