Olinda Chapel posted a photo of her and her former husband and admitted she missed Tytan. The photo which she subsequently deleted was captioned:

Just one of those days, i miss us, its normal. 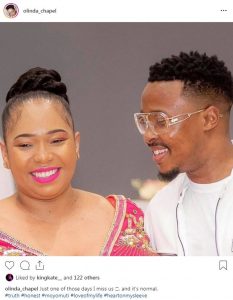 Olinda and Tytan, a few weeks ago ended their marriage publicly after things went sour between the 2 of them. Tytan even issued a statement which he captioned GODSPEED, announcing the end of their marriage.

Tytan and Olinda married last year and the 2 have a daughter together.