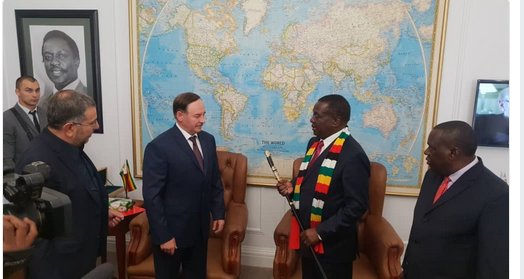 A Belarusian official yesterday jetted into Zimbabwe to follow up on investment deals signed between his government and the government of Zimbabwe in January this year. General Colonel Victor Sheiman who is the Belarusian Chief of Presidential Affairs is on a 3-day state visit. General Sheiman will meet the president and discuss agriculture, mining, power, construction and transport.

Addressing Journalists at the airport yesterday the visiting General said:

My visit is a follow up on President Mnangagwa’s meeting with our President in January. We have come with some proposals to supply agricultural machinery to Zim and trucks to ferry cargo.We have proposals for the supply of mining machinery and trucks.

We also want to propose partnership in construction. We want to build industrial enterprises and we are ready to build roads and bridges. We want to set up irrigation systems and transmission lines for electricity. We will also discuss the possibility of a joint venture for construction of power stations in Zimbabwe

he was received at the airport by several government officials.