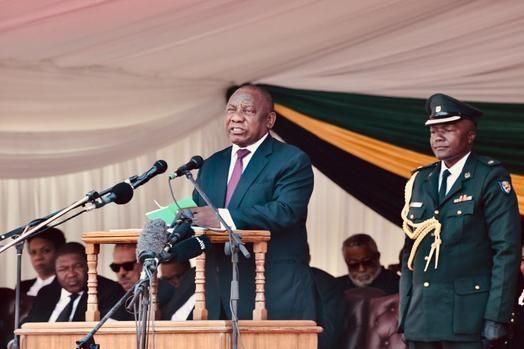 South African President Cyril Ramaphosa said the booing he experienced in Zimbabwe on Saturday was the second time he had such an experience. He said he had to apologise because the attacks on foreign nationals were a national shame.

Ramaphosa was speaking on Sunday at the Grace Bible Church in Pimville, Soweto, where he was the guest of honour.

He pleaded with the congregants and Pastor Mosa Sono to help his government fight the scourge of xenophobia which hit parts of Gauteng and KwaZulu-Natal recently. He said:

This is the second time I was booed. The first time is when I introduced the national minimum wage for workers.

I was booed by a certain group of people and those were the community health workers. They booed me because I did not mention them in the wage allocation.

In Zimbabwe, I was booed by the whole stadium. I had to apologise to the people of Zimbabwe for the attacks.

I do not want to call it xenophobic attacks. South Africans do not hate people of other nations.

We had to offer an apology on behalf of the people of South Africa. We are loved on the continent. We are sought after country

I had to apologise because those attacks were a national shame.

Ramaphosa was in Zimbabwe to attend the State Funeral of former President Robert Mugabe on Saturday afternoon at the National Sports Stadium when he was booed by the crowd as he took to the podium to make his address.

5 comments on “Ramaphosa: In Zimbabwe, I was Booed By The Whole Stadium”