Social media yesterday was awash with a photo of supposed G40 party registration with ZEC. G40 is or was a faction of Zanu PF that was reported to have been against President Mnangagwa’s ascension to the throne in favour of the younger generation in Zanu PF. Believed to be Jonathan Moyo’s baby, G40 ‘s rivalry referred to as Lacoste, came in power by the famous coup. After the coup, G40 faction went quiet until yesterday when social media started circulating a photo that supposedly showed they had registered with ZEC as an official opposition party. 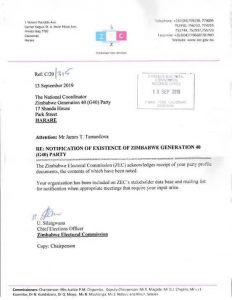