The University of Zimbabwe has cancelled its decision to send students on recess. The academic institution had announced that in solidarity with the nation which is mourning the passing on of Zimbabwe’s founding leader, Robert Mugabe, lectures were being suspended. The press release had also said that ordered students residing in halls of residents to vacate their rooms with observers believing that the move was meant to create room for guests expected to attend Mugabe’s funeral. The change in stance comes after Students reportedly demonstrated on Tuesday. It also comes when there are reports suggesting that the burial of Mugabe has been postponed indefinitely.

Recalling the decision, the University advised that lectures were now on as usual. We present the press release in full below.

Students are therefore advised to report for classes as usual. Those in University accommodation are therefore no longer expected to vacate their residences as earlier communicated.

Any inconveniences caused to our valued stakeholders and clients are sincerely regretted. 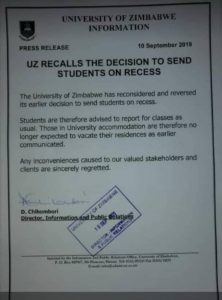