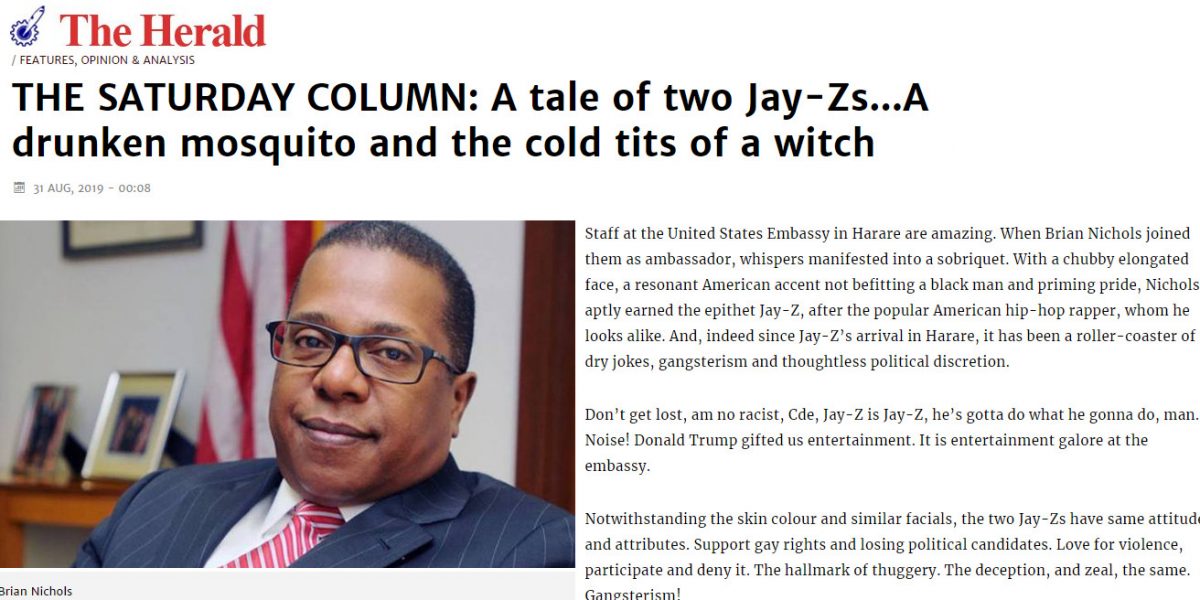 The European Union (EU) Ambassador to Zimbabwe Timo Olkkonen has described apparent attacks by The Herald on the US Ambassador as ‘insulting and in extremely bad taste’.

On other news I find these continued ad hominem attacks of @HeraldZimbabwe on my esteemed @usembassyharare colleague Brian Nichols very insulting and in extremely bad taste.

Here are some excerpts from the Herald article in question, the US Ambassador to Zimbabwe:

Staff at the United States Embassy in Harare are amazing. When Brian Nichols joined them as ambassador, whispers manifested into a sobriquet. With a chubby elongated face, a resonant American accent not befitting a black man and priming pride, Nichols aptly earned the epithet Jay-Z, after the popular American hip-hop rapper, whom he looks alike. And, indeed since Jay-Z’s arrival in Harare, it has been a roller-coaster of dry jokes, gangsterism and thoughtless political discretion.

Notwithstanding the skin colour and similar facials, the two Jay-Zs have same attitude and attributes. Support gay rights and losing political candidates. Love for violence, participate and deny it. The hallmark of thuggery. The deception, and zeal, the same. Gangsterism!

Fast forward to Harare today. What with our own Jay-Z incarnate, Nichols sinking in the MDC trenches, nose, chubby face and body? Helping them provoke the Government, burn and loot shops and property, then protect them. Turn villains into heroes. Rename looters, criminals and thugs as defenders of human rights. My foot!

Nichols’ support for violence in Zimbabwe is brazen, his summative contribution to anarchy and lawlessness ugly. His attitude towards the rule of law as cold as the tits of a witch. His support for losing MDC-Alliance is telling. With the regime change agenda tilting his balance of thought, Nichols is in a class of his own. Hallucinating about regime change.