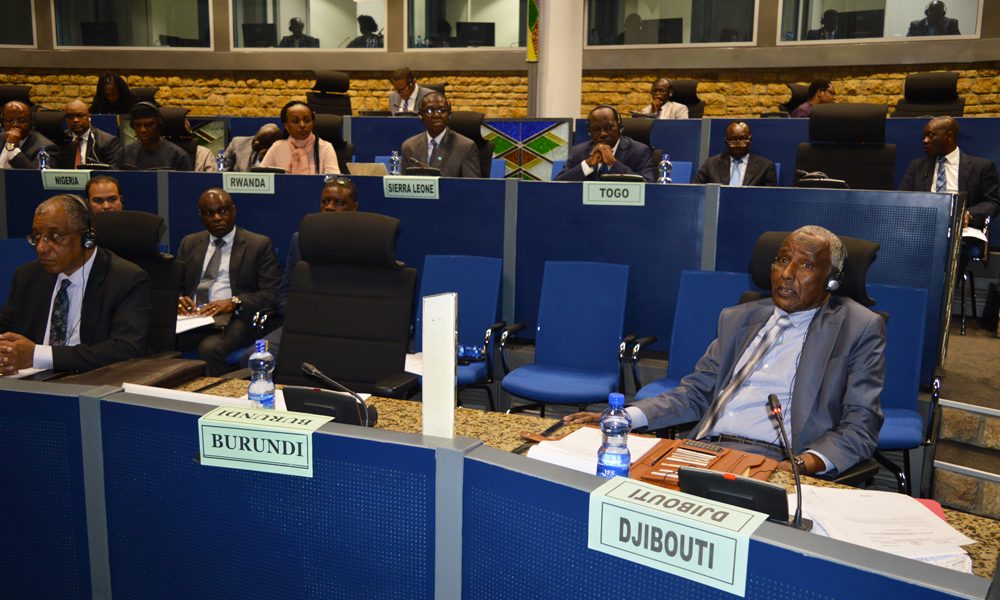 Adopted by the Peace and Security Council during its 868th meeting held on 14 August 2019 on the state of foreign military presence in Africa: Implications on the implementation of the Common African Defence and Security Policy:

The Peace and Security Council,

Taking note of the statement made by H.E. Albert Ranganai Chimbindi, Ambassador of the Republic of Zimbabwe to the AU and Chairperson of the PSC for the month of August 2019, and the presentations made by Dr. Admore Kambudzi, Director of Peace and Security Department on behalf of the Commissioner for Peace and Security, Ambassador Smail Chergui; also taking note of the presentation by Ambassador Kio Amieyeofori, on behalf of  the Chairperson of the Committee of Intelligence and Security Services of Africa (CISSA), Ambassador Ahmed Rufai Abubakar; Further taking note of the statements made by the representatives of China, France, Russia, United Kingdom and the United States of America, as well as by the North Atlantic Treaty Organization (NATO);

Underling the need for full implementation of Article 7(l) of the PSC Protocol emphasizing that external initiatives in the field of peace and security on the Continent take place within the framework of the Union’s objectives and priorities as outlined in the AU relevant instruments;

Taking note of the fact that some AU Member States, within their sovereign status, have entered into bilateral and multilateral arrangements with non-African partners with a view to addressing and containing threats to peace and security on their respective territories.

Acting under Article 7 of its Protocol, the Peace and Security Council:

1.    Notes with concern over the increase in the  establishment of foreign military presence and military bases in Africa; emphasizes that the defence and security of one country in Africa is directly linked to that of others as provided for in the Common African Defence and Security Policy and also in the AU Non-Aggression Pact; in this regard, underlines that these AU instruments constitute the bedrock  of Africa’s collective defence and security;  further expresses deep concern that albeit this increase of foreign military presence and military bases in different parts of the continent, the threats which they are supposedly expected to neutralize, continue to increase an intensity and geographic expansion in different parts of the Continent; also expresses concern that foreign military presence and military bases are contributing to the risk of rivalry and competition among foreign powers within Africa and undermining national sovereignty and peace efforts;

2.    Strongly condemns any external interference into Africa’s peace and security affairs and urges that all external support to peace and security in Africa should be well-coordinated and directed towards achieving AU’s objectives and priorities and should be provided within the framework of the relevant AU instruments;

3.    While appreciating the support of partners in the promotion of peace, security and stability in Africa, emphasizes that the AU Member States and the AU Commission should enhance their efforts in popularizing and providing effective support towards the implementation of the Common African Defence and Security Policy and the African States should guarantee that any external support, either bilateral or multilateral, is in conformity with this Policy;

4.    Underscores that collective defence and security in Africa is of high importance, taking into consideration the rapid increase of foreign military presence in the Continent; in this regard, appeals to all AU Member States that decide to host foreign military entities/bases in their countries to deploy necessary efforts to inform their neighbours, their respective Regional Economic Communities and Regional Mechanism (RECs/RMs) and the African Union and ensure that the signed Memoranda of Understanding (MoUs) are in conformity with the provisions of the Common African Defence and Security Policy and other relevant AU policies on defence and security and that they contribute towards the objectives and priorities of the AU;

5.    Emphasizes the need for the AU Commission and the RECs/RMs to redouble their efforts to ensure the operationalization of the African Standby Force (ASF), which is the primary home-grown model in the Continent, to enable Africa to enhance its defence and security arrangements for AU Member States and their people; such a capability would provide Africa with the means to timeously respond to threats to peace and security; furthermore, stresses the importance for African countries to put more focus on capacitating their national forces, as well as promote intelligence sharing among themselves;

6.    Emphasizes the primary role of the African countries in managing their internal affairs and reaffirms its commitment to respect the sovereignty, national unity and territorial integrity of each African state; therefore, encourages to all AU Member States which need support incapacitating their national defence and security forces and institutions to explore available avenues in the United Nations (UN) system and those in the RECs/RMs to provide such support, with a view to continue building mutual trust, confidence and collective capabilities and strength among African countries;

7.    Encourages the AU Member States to enter into bilateral agreements in the matters of common interests on peace and security, in order to enhance coordination and share expertise and experience; further encourages the Member States to emulate best practices on military operations among African states and RECs/RMs in addressing threats to peace and security and sustaining stability;

8.    Underscores the important role played by information, experience and intelligence sharing platforms, such as the Nouakchott and Djibouti processes and calls for their further strengthening at the higher political level; further stresses the need for promoting similar processes in other regions of the Continent;

9.    Requests the Chairperson of the Commission to regularly brief the Council on the status of the implementation of the Common African Defence and Security Policy and other relevant AU instruments on defence and security in the continent, in line with Article 14 of the Preamble of the Solemn Declaration of the Common African Defence and Security Policy, with a view to providing the opportunity to Council to review implementation and address any challenges that may be identified; In this regard, agrees to receive such briefing at least twice a year with the participation of CISSA;

10.    Requests the PSC Military Staff Committee to undertake a comprehensive study on foreign military presence and military bases in Africa, its advantages and disadvantages and submit proposals on the way forward for consideration by the PSC; in this context, agrees to provide a special report, within the spirit of the efforts to silence the guns in Africa, and to do so simultaneously with the report of the PSC on its Activities and the State of Peace and Security in Africa to the ordinary session of the Assembly of the AU to take place in January/February 2020;