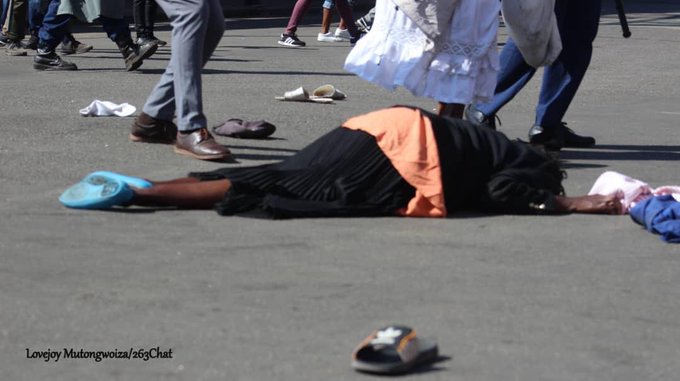 The woman who was badly injured and carried off by Red Cross is now in hospital where she is battling for her life. She is a party member from Harare North who is in her 50s.

MDC vice-chairperson, Job Sikhala has called for the international community to make President Emmerson Mnangagwa account for what he considers crimes against humanity.

Sikhala made the remarks last week on Friday after the police violently dispersed MDC demonstrators in central Harare.

Now is the time to plait the international law that presses international obligations for the crime against humanity against Mnangagwa.

… Today (Friday), Mnangagwa’s person has been exposed to the whole world as the most brutal dictatorship ever seen in the world. It went on brutal torture and assault of innocent peaceful demonstrators in central Harare.

The common denominator to his hypocrisy and charade of political reform has been exposed for everyone to see, especially the lie he has been selling to the international community that he is a reformist.

Mr Sikhala can shout Hague 70 times seven times, but his fantasy of getting into power through the backdoor will not be realised.

He can give as many ultimatums as he wishes, but the government will not be blackmailed to surrender the will of the people to them just because they have invited suffering upon the nation.