The Chamisa-led MDC will this Monday morning file an appeal against the Police order to ban their march in Bulawayo.

The party’s lawyers, Tanaka Law and Chambers in a notice to the Bulawayo Magistrates Court, wrote:

RE: NOTICE OF APPEAL AGAINST PROHIBITION ORDER

Reference is made to the above matter in terms of which we act for and on behalf of the Movement for Democratic Change Alliance Appellant herein.

We hereby file an appeal by the Movement for Democratic Change Alliance against the prohibition notice issued by the officer commanding Zimbabwe Republic Police Bulawayo Central Chief Superintendent Elizabeth Phiri.

It is our considered view that the aforementioned prohibition order flies in the face of the Constitution of Zimbabwe and cannot be sustained, hence the present appeal in terms of Section 27 B (2) of the Public Order and Security Act.

Such an appeal should be heard on an urgent basis and prior to the date of the proposed gathering, in this case, the impending demonstration of 19 August 2019… 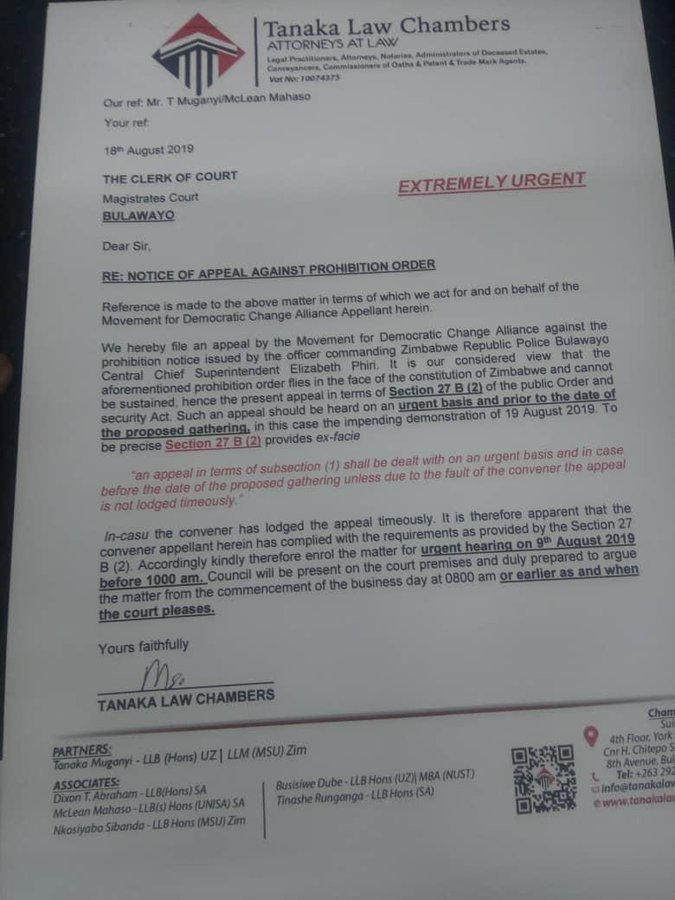 MDC To Appeal Against Police Order To Ban Bulawayo Demo