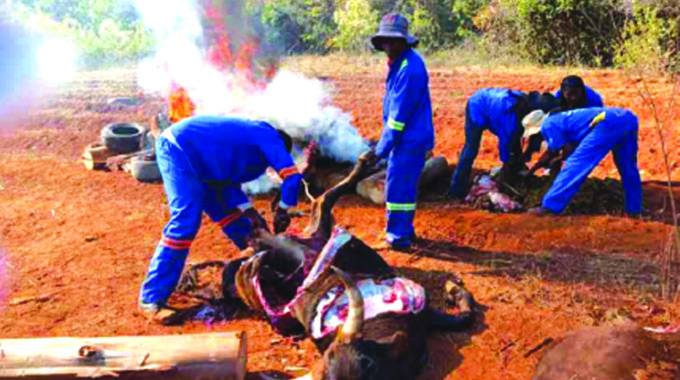 A Manicaland farmer lost 14 beasts after they were seized and shot by the department of veterinary services and police officers.

The incident occurred on Wednesday last week when the farmer from Mutasa District, David Matanga, illegally moved the cattle from Gutu to Penhalonga.

Gutu has been listed as a foot and mouth (FMD) red zone in a bid to quell the spread of the disease, while Mutasa is a clean area.

The animals were destroyed after Matanga was deemed to have violated Statutory Instrument 280 of 1984 Animal Health (Movement of Cattle and Pigs) Regulations of 1984.

During our routine inspections, we noticed that there was an illegal movement of cattle from Gutu, which is underfoot and mouth disease quarantine.

If an area is under quarantine, livestock is not supposed to be moved from that area to a clean area where there is no FMD.

Besides, the cattle were supposed to be moved to Chipinge which is another dirty area with FMD. The cattle were destined for Chipinge for direct slaughter, but they ended up in Mutasa for breeding purposes.

An official at Matanga’s farm (Plot 3, Pagomo Farm, Toronto), Bernard Bepe said that the former moved the cattle unknowingly. He regretted the destruction of the cattle.