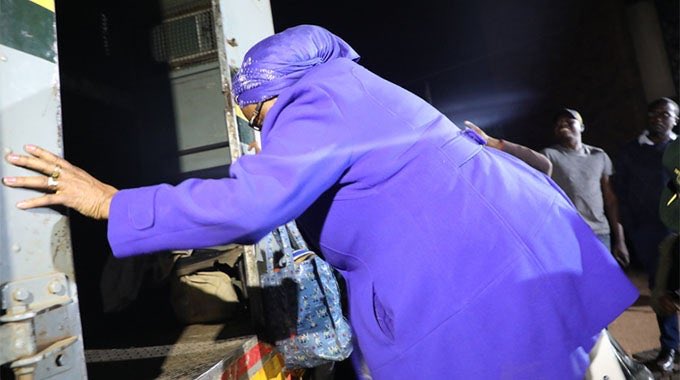 The Minister of Environment, Tourism and Hospitality Industry, Hon Prisca Mupfumira, has been arrested on serious charges involving corruption and abuse of office.

When she appeared in court after being arrested her lawyer applied for bail but the Prosecutor-General issued a certificate forbidding the grant of bail for 21 days, so the magistrate accordingly refused it and remanded her in custody for 21 days.

In this Court Watch, we shall not comment on whether Hon Mupfumira is guilty of the crimes alleged against her ‒ that will be for a court to decide in due course.

Nor shall we go into the question whether she should be released on bail – that should be a consideration for a court.

What this bulletin will do is to question the constitutionality of a law which gives the Prosecutor-General power to forbid the grant of bail to accused persons.

First, though we should explain briefly what it means to be released on bail pending trial.

What is bail pending trial?
Anyone who is arrested must be brought before a court within 48 hours, but their trial can seldom take place so soon, so they have to be remanded ‒ that is to say, ordered to come back to court at a later date.

The court has to decide whether in the interim the person must be kept in custody or whether they can be released on bail, i.e. set free subject to conditions.

These conditions usually require the payment of a sum of money which will be forfeited if the person fails to obey the order to come back to court.

The Constitutional Right to Bail

The granting of bail is a very important part of our criminal procedure because it allows people who have been arrested to remain at liberty while waiting for their trials to begin.

It must be remembered that these people are presumed to be innocent until they have been found guilty by a court, and until then they should not suffer the indignity and hardship of detention in prison unless there are compelling reasons justifying their detention.

So important is the right to liberty that section 50(1)(d) the Constitution enshrines the right of arrested persons to bail in those very words:
“Any person who is arrested—
………….
(d) must be released unconditionally or on reasonable conditions, pending a charge or trial, unless there are compelling reasons justifying their continued detention”.

In summary section 32(3b) states that where a person is brought before a judge or magistrate for remand after being arrested on reasonable suspicion of having committed a serious economic crime listed in the Ninth Schedule to the CP&E Act [the crimes for which Hon Mupfumira was arrested are in the list] and the Prosecutor-General issues a certificate stating:·

.that the crime involves significant prejudice to the national interest,
· that it is necessary to detain the person for up to 21 days in order to investigate the crime properly, and
· that the police officer who arrested the person was of or above the rank of assistant inspector.

Is Section 32(3b) Constitutional?

Section 50(1)(d) of the Constitution says that arrested people must be released unless there are compelling reasons justifying their continued detention.

The effect of section 32(3b) of the CP&E Act, in contrast, is that arrested people must be detained if the Prosecutor-General issues a certificate under the section. Put like that the inconsistency between section 32(3b) and the Constitution is obvious.

If it is necessary to give further reasons why section 32(3b) is unconstitutional, here they are:

· In several cases, judges of the High Court have said that the Constitution places an obligation on the prosecution to establish compelling reasons why an accused person should be denied bail.

What are compelling reasons? Over many years courts have held that legitimate grounds for refusing bail are:
if the accused person is likely to abscond, or
interfere with witnesses or otherwise obstruct police investigations, or
if they are likely to commit further crimes.

Anyone of these grounds, if clearly established by the prosecution, could constitute a compelling reason for refusing bail.
· Under section 32(3b) of the CP&E Act, on the other hand, the Prosecutor-General need simply state that the crime with which the accused person is charged is a serious one involving significant prejudice to the national interest.

He does not have to establish, or even allege, that the accused will abscond, or interfere with witnesses, or commit further crimes.

The mere fact that a person is charged with a serious crime does not necessarily establish any of those factors and does not necessarily constitute a “compelling reason” for denying them bail.
· Section 50(1)(d) of the Constitution permits bail to be refused if “there are compelling reasons” for the refusal; the existence of those reasons must be objectively established to the satisfaction of the court.

Under section 32(3b), in contrast, all the Prosecutor-General need do is allege that the accused person’s crimes involve significant national prejudice; he does not have to prove or establish the prejudice.
· When presented with a certificate under section 32(3b) containing the necessary allegations, a court must refuse to grant the accused person bail. It has no discretion in the matter.

The Prosecutor-General, therefore, has deprived the court of its essential judicial function vested in courts by section 162 of the Constitution.

Clearly, section 32(3b) of the CP&E Act is inconsistent with section 50(1)(d) of the Constitution and is therefore void.

Laws which are inconsistent with the Constitution are void (i.e. invalid) by virtue of section 2 of the Constitution, and they are void even if the Constitutional Court has not declared them to be such ‒ this point was made by the Court in Veritas’ child marriage case [Mudzuru & Another v Minister of Justice & Others CCZ 12/2015 ‒ Link]

This conclusion will not be of much comfort or use to Hon Mupfumira. Although magistrates have power under sections 85 and 175 of the Constitution to declare laws to be unconstitutional, they would be most reluctant to use that power when it came to declaring an Act of Parliament to be void.

Instead, Hon Mupfumira’s lawyers will have to apply to the High Court or even the Constitutional Court for the necessary order, and it is most unlikely that the court will give judgment in their application before her 21-day detention comes to an end.