Botswana’s President, Mokgweetsi Eric Keabetswe Masisi, wrote to his predecessor, Lieutenant General Dr Seretse Khama Ian Khama on July the 25th informing him of his immediate removal from the role as Champion of Vision 2036 Council.

The letter invited a sharp response from Khama, who accused his successor of vindictiveness.

Below is the letter that was written by President Masisi’s Office:

RE: IMMEDIATE REMOVAL FROM ROLE AS CHAMPION OF THE VISION 2036 COUNCIL

The above matter refers.

2. have been instructed by His Excellency the President of Botswana, Dr Mokgweetsi Eric Keabetswe Masisi, to duly inform you that he has taken the decision to relieve you of the position of Champion of the Vision 2036 Council.

3. For the avoidance of any doubt be advised that upon the receipt of this communique you are immediately relived as Champion of the Vision 2036 Council.

4. His Excellency extends his gratitude for the role you have played in the afore-mentioned position and wishes all the best in your future endeavours. 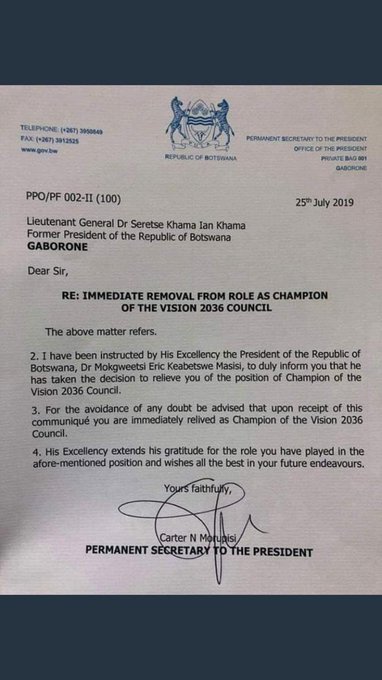