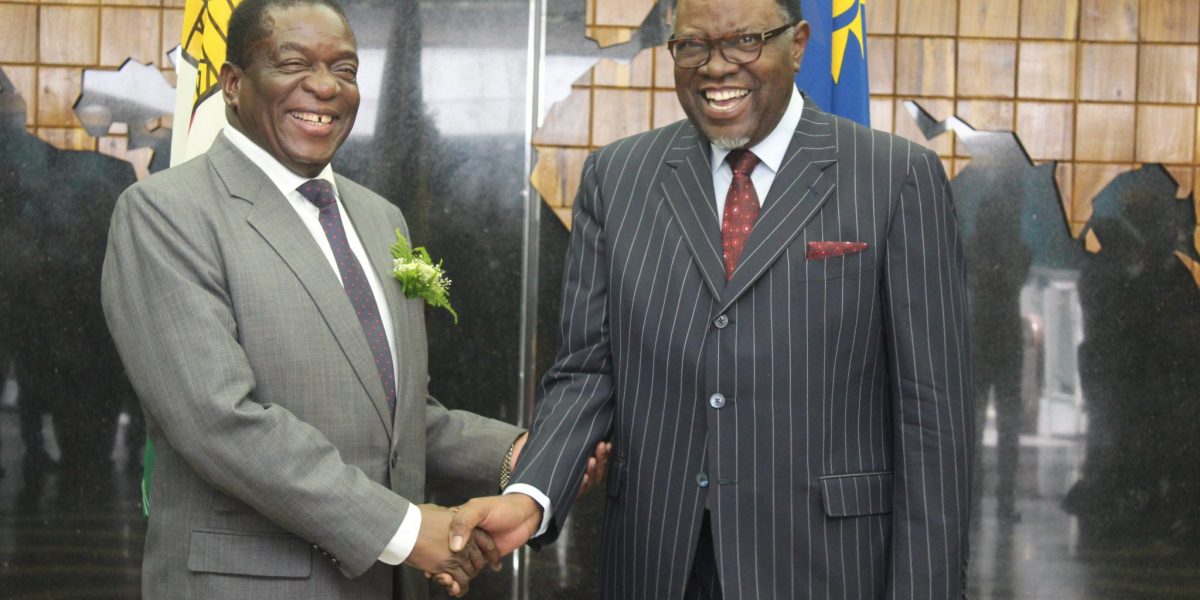 JOINT COMMUNIQUÉ ISSUED ON THE OCCASION OF THE STATE VISIT TO THE REPUBLIC OF NAMIBIA BY HIS EXCELLENCY EMMERSON DAMBUDZO MNANGAGWA, PRESIDENT OF THE REPUBLIC OF ZIMBABWE,

The two Heads of State noted with appreciation and satisfaction the excellent bilateral relations that exist between the two countries and reaffirmed their full commitment to further deepen and broaden these relations for the mutual benefit of their two peoples.

During their Official Talks, the two Presidents reviewed a wide range of bilateral, regional and international issues of mutual interest.

The two Presidents further lauded the progress made in the implementation of the bilateral cooperation programmes between the two countries in various sectors such as agriculture, mines and energy, education and training, health, local government, trade and investment, environment and tourism, transport and communication, sport and culture, diplomatic cooperation and the legal sector, that emanated from the 9th Session of the Namibia-Zimbabwe Joint Permanent Commission of Cooperation, which preceded the State Visit from 22-24 July 2019.

During the State Visit and in furtherance and deepening bilateral cooperation, the following legal instruments were signed:

i. Terms of Reference for the Operationalization of the Joint Trade and Economic Committee (JTEC);

vii. Memorandum of Understanding on the Promotion of Small and Medium Enterprises;

iii. Reviewed Memorandum of Understanding on Cooperation in the field of Information, Media and Broadcasting;

iv. Revised Memorandum of Understanding on Science, Technology and Innovation;

v. Memorandum of Understanding between Zimbabwe Revenue Authority and the Namibia Customs and Excise on Mutual Administrative Assistance;

vi. Memorandum of Understanding between the Zimbabwe Revenue Authority and the Namibia Customs and Excise on the Practical Implementation of the Bilateral Trade Agreement; and,

vii. Twinning Agreement between the Kavango East Region of Namibia and the Mashonaland West Province of Zimbabwe.

Informed by the principles of the African Continental Free Trade Area, the two Heads of State agreed on the need to increase trade and investment between the two countries.

In this context, they jointly inaugurated the Dry Port of the Republic of Zimbabwe, on land donated by the Government of Namibia, which holds great potential not only in the facilitation of imports and exports via Walvis Bay Port to and from landlocked Zimbabwe but also augments efforts towards closer regional and continental economic integration.

While welcoming the signing of the MoU on the Promotion of Small and Medium Enterprises, as well as the operationalization of the Joint Trade and Committee (JTEC), the two Presidents called on the private sectors in both countries to actively engage in mutually beneficial partnerships aimed at accelerating trade and sustained economic growth and development between the two countries.

The two Presidents agreed on the need to collectively confront poverty and diseases that are retarding development efforts by the two countries, especially the HIV/AIDS pandemic, tuberculosis and malaria.

They underscored the need to make resources available for effective and affordable treatment of these diseases.

The two Presidents expressed satisfaction with the operations of the Kavango-Zambezi Transfrontier Conservation Area, which holds great potential for the advancement of regional tourism, sustainable management of shared resources, and community empowerment.

In the same vein, President Geingob commended President Mnangagwa for the successful hosting of the Africa Wildlife Economy Summit held in Victoria Falls, Zimbabwe, from 13-14 June 2019.

President Geingob, in his capacity as SADC Chairperson, recalled the launch of the SADC Regional Appeal for Humanitarian Assistance in response to Tropical Cyclone Idai and Kenneth that afflicted Malawi, Mozambique and Zimbabwe.

The two Presidents reaffirmed their support towards the full implementation of the Paris Climate Agreement given the recent natural environment calamities which befell the region.

Furthermore, the two Heads of State applauded the decision of the two countries to cooperate in the metrology sector to mitigate the effects of climate change.

At the regional level, the two Presidents exchanged views on the prevailing political, economic and security situation in the SADC region.

In this context, the two Presidents reaffirmed their commitment to work together in pursuit of regional economic integration.

The two Heads of State further underscored the necessity for Africa to take its destiny in its own hands, especially through the vigorous pursuit of the objectives of collective economic independence, and the strengthening of regional and continental frameworks for the promotion of socio-economic advancement of Africa.

In this connection, President Geingob reiterated Namibia’s concern over the socioeconomic difficulties experienced by Zimbabwe exacerbated by the economic and targeted sanctions imposed by Western countries.

He called on the immediate and unconditional lifting of the sanctions that are causing untold hardship to the people of Zimbabwe and stressed the need for constructive engagement and dialogue with the Government of Zimbabwe.

The two Presidents welcomed the launch of the African Continental Free Trade Area. They noted the urgent need for African countries to intensify intra-African trade as a tool to fast-track the African Union’s long-term developmental vision of Agenda 2063, thereby realizing Africa We Want.

The two Heads of State applauded the continued consolidation of democracy and good governance in the region, commended the SADC countries for the peaceful and credible elections held and called on the international community to continue assisting the people of the DRC in their efforts towards consolidating peace, national reconstruction and economic development.

The two Presidents expressed satisfaction with the recently held SADC Solidarity Conference on Western Sahara, which brought to the forefront the plight of the Saharawi people.

Despite the momentum brought about by the holding of the Solidarity Conference, the two Presidents noted the lack of progress in the implementation of UN resolutions on Western Sahara.

They called upon the international community to intensify efforts towards the full exercise of the inalienable right to self-determination and national independence of the Saharawi people.

They equally expressed serious concern about the deteriorating situation in the Middle East, particularly the situation in Palestine. Both Presidents called for the immediate implementation of the relevant UN Resolutions on Palestine.

With regards to the reform and democratization of the United Nations, especially the Security Council, the two Presidents reaffirmed the African Common Position, contained in the Ezulwini Consensus and the Sirte Declaration.

Whilst in Namibia, President Mnangagwa held a Breakfast Business Forum with the Namibian and Zimbabwean business community in Windhoek. He also visited MEATCO in Windhoek, Seaflower Pelagic Fishing Processing (Pty) in Walvis Bay as well as a site visit at NamPort.

President Mnangagwa laid a wreath at the Heroes’ Acre in honour of the fallen heroes and heroines of Namibia.

The two Presidents agreed to elevate the Joint Commission mechanism to a Bi-National Commission (BNC), to be co-chaired by the Presidents of Namibia and Zimbabwe.