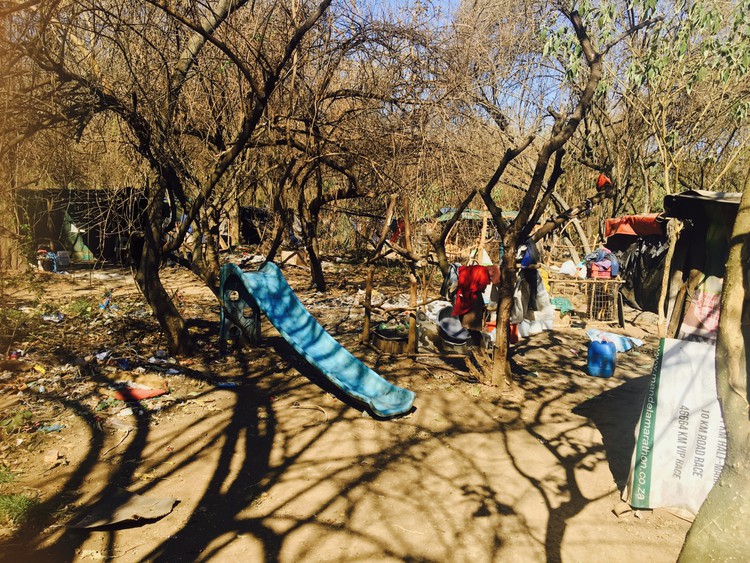 The Ehlathini Village is home to about 300 waste pickers at the New England Landfill dump. Photo: Nompendulo Ngubane

Some Zimbabweans living in South Africa have reportedly joined other immigrants from Malawi and Lesotho as well as local Zulu and Sotho-speaking people in establishing an informal settlement at the New England Landfill site in Pietermaritzburg.

The village has been given the name “Ehlathini” (the forest). According to a resident of the mushrooming settlement, Neli Xulu, the shacks are mushrooming every week. She said:

Shacks are mushrooming every week… I was working as a domestic worker earning R600 a month. I had lost my parents five years before. Taking care of my two children and four of my late sister’s children was not easy … I left the domestic work and came here.

There was no other option than to build me a shack. Travelling [to and from Kranskop, where the children remain] and renting would have been hard. Living here saves a lot of money for me.

However, there is an acute shortage of basic social amenities at the place, with little running water and ablution facilities available. Sboniso Dlamini, another shack dweller said:

The whole community uses one tap. The tap is far from the shacks. Sometimes the tap will run dry. We have to travel to Sobantu and ask for water from people’s homes.

Walking to Sobantu is about six to seven kilometres from the dumpsite. Some of us have toilets. Others share toilets. Those who don’t have toilets, use the bushes.