ZCTU Secretary General, Japhet Moyo in the center. On his right is MDC President Nelson Chamisa

RE: ACTION AGAINST POVERTY, THE DETERIORATING AND UNSTABLE MACRO-ECONOMIC ENVIRONMENT

The Zimbabwe Congress of Trade Unions (ZCTU) General Council, the highest making decision body in-between the Congress, met today 20 July 2019 to receive reports on the state of preparedness towards action against poverty, the detereorating and unstable macro-economic environment.

The General Council noted that working people of Zimbabwe have suffered immensely as wages have failed to keep pace with the inflationary trend. The situation has worsened rendering it practically impossible for workers across all sectors to earn the current salaries and sustain their families or be able to go to work.

The upward adjustment in fuel prices has had knock•on effects on the prices of basic goods and services, worsening the impact of the already depreciating exchange rate on the general level of prices.

Since the scrapping of the multicurrency, despite government propaganda, prices have remained high beyond the reach of many while inflation continues to go up. The General Council reiterated its call for wages and salaries to be paid in the United States Dollars or its equivalent at interbank market rate.

The ZCTU General Council resolved to continue mobilizing and reaffirmed its call for a general strike at a date to be announced soon. We therefore urge all workers to remain ready for the impending stayaway. 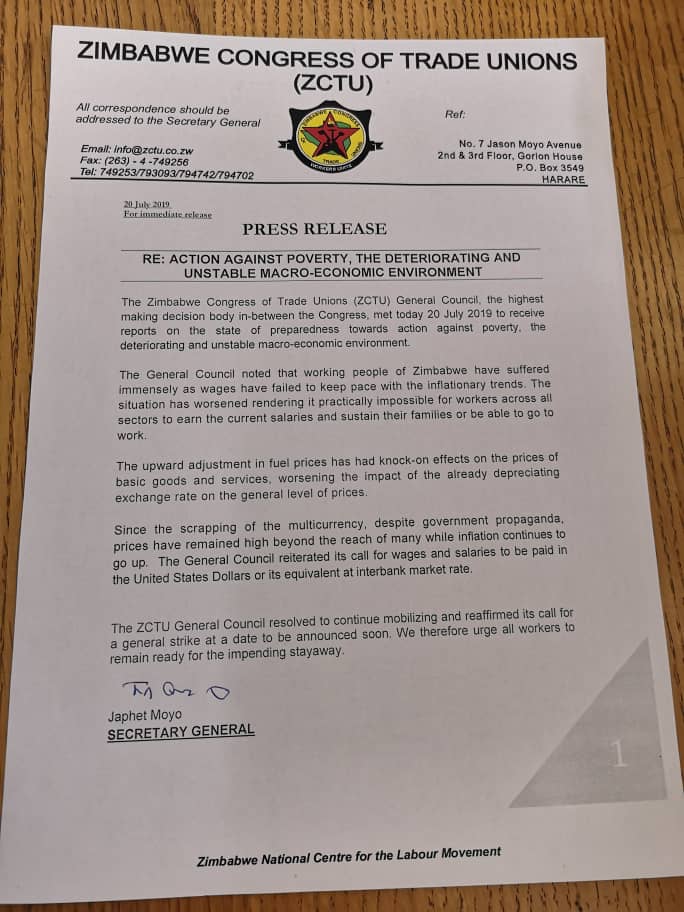 FULL TEXT: “Get Ready For A Stayaway” – ZCTU