A UK journalist reportedly tried to destabilise the Zimbabwe Netball team, the Gems, who are currently in Liverpool for the Vitality Netball World Cup. The accused reportedly tried to influence them to seek asylum in the UK arguing that the players were being abused. Maimba Mapuranga posted on Facebook and said:

As we celebrate the win VS Sri Lanka, May it be known that a few Zimbabweans (names With held) based in England worked hard to destabilize the Girls camp by calling ZRP Liverpool to interrogate us at 2am in the deadest of the night before the Most critical match in the History of Zimbabwean Netball, But these Zimbos cared less, all they cared for was ngativasungisei kuti vari kuita in Thier own words “slavery” – the irony of it… Kuti reporter for slavery kumu British.. Lol..
The Captain of the team was also woken up, taken aside and questioned on the said allegations.. I am not privy to what she said but after their closed door talk, the British Police came and apologized profusely to us.. But imagine the psychological trauma the Team Captain had to go through..
I Salute the captain because she showed courage in the face of intimidation.. Waking up on the same morning she was questioned, she led her troops to a historic win… 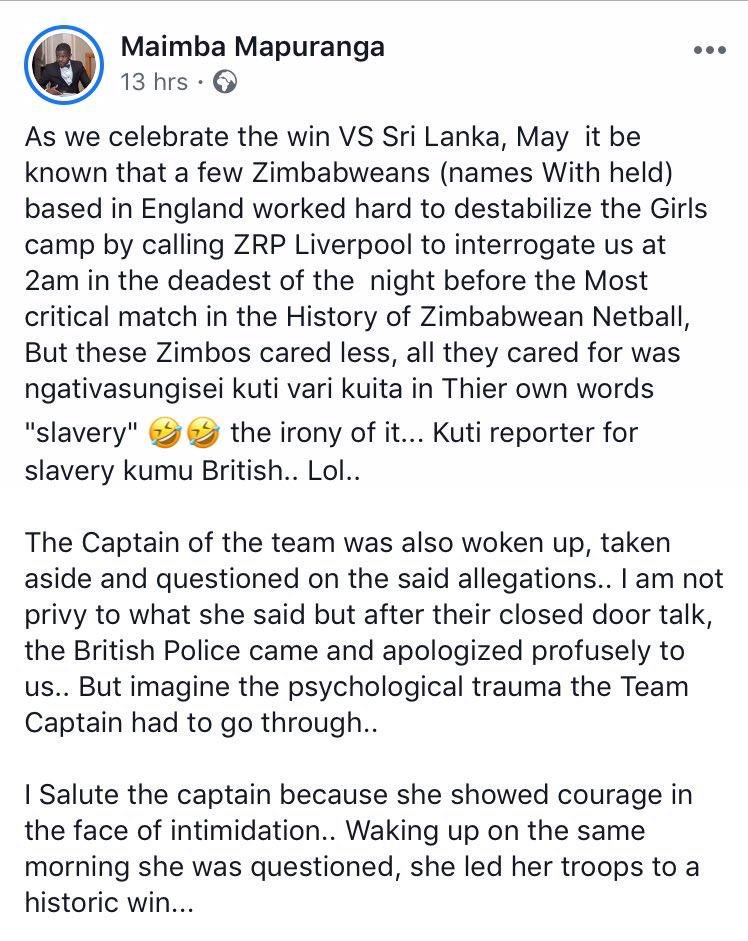 This report is in sync with that of Gift Mawire who also said:

The moment you see males jumping into female dressing rooms ,you know it does not end well. I said so when the Netball team arrived in Liverpool for the world cup tournament. Last night I had a chat with my relative, a key figure in that camp. She narrated how this enemy of progress masquerading as a journalist tried to ruin it for the nation. He unsuccessfully tried to influence the ladies to abandon camp and seek UK asylum saying they were victims of human rights abuse . Surely one having fewer undergarments is not abuse.These are only visiting.I am told two police officers where deployed on the early hours of the morning to investigate. This was ahead of their match .Police found no evidence of abuse after speaking to the team captain , they issued an apology to the Southern African team. And the trouble maker is still shamelessly rooming and sniffing around the camp despite all this . This Mr know it all journalist should be condemned in strongest terms .He feeds and derive his pleasure from chaos and suffering of fellow citizens and I think it’s high time someone tells him how silly and a giant asshole he is . 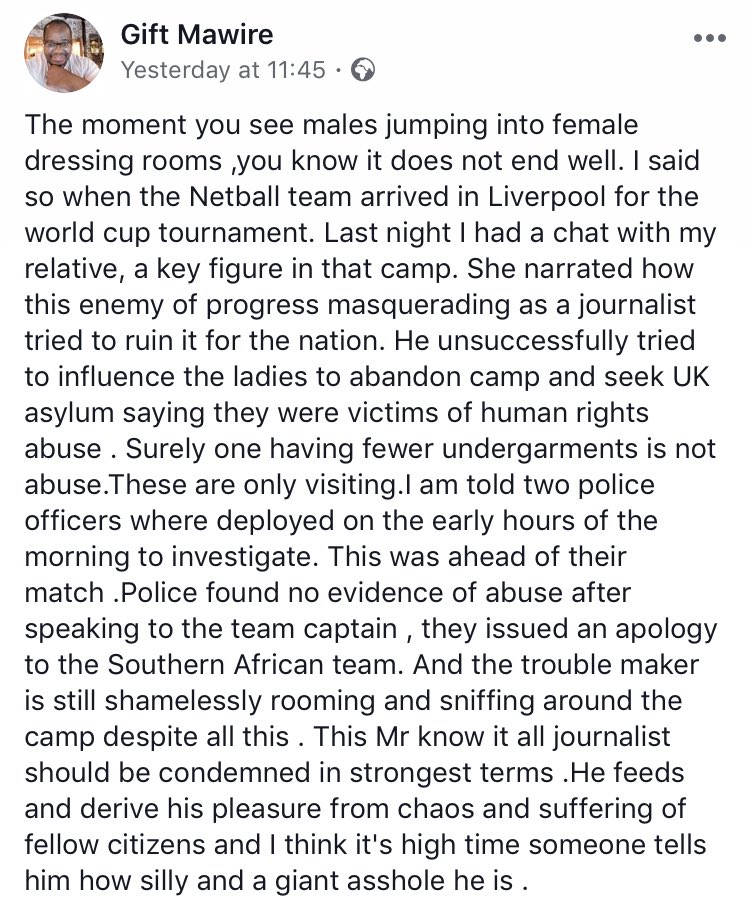 Meanwhile, the Gems are through to the knockout stages after edging Ireland with two goals.