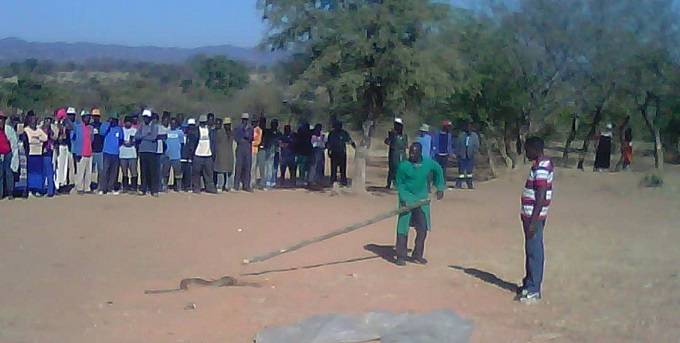 A group of self-styled exorcists, Tsikamutandas, captured a two-meter long python under the bed of a villager under Chief Gwebu in Matabeleland South province.

A four-man team of Tsikamutandas is said to have been invited by Chief Gwebu and local Councillors to cleanse the community of evil spirits that have apparently been tormenting residents.

The snake-capturing incident took place on Thursday morning when the team descended at Mawabeni business centre.

The snake was paraded on a football field near the Mawabeni shopping centre.

The owner of the house from which the snake was captured by the Tsikamutandas said that she did not know where the snake came from. She said:

I have invited several prophets to my homestead to remove it but they all failed. I don’t know where it came from but it’s not mine.

The exorcists then asked for the police to be called in before burning the snake as requested by members of the community.