The Permanent Secretary in the Ministry of Information, Publicity and Broadcasting Services, Mr Nick Mangwana, has said that the government will not hesitate to deploy security forces in response to squash opposition MDC purported plans to overthrow the government before 2023. Mangwana said that trying to overthrow a constitutionally elected government was rebellious and undemocratic. Read the full text below.

Government has noted with disgust insurgent rants from a member of the opposition threatening the legitimate public authorities in Zimbabwe. The illegal undermining of a legitimate authority is a serious crime. Trying to overthrow a government is subversive and Government will not hesitate to deploy the security institutions to constrain such abuse of democratic tenets and maintain the constitutional order.

Zimbabwe is a peaceful country and that peace is not accidental. That status of a peaceful country will be maintained by ensuring those that threaten democracy and the liberal values adopted by the New Dispensation are tried and if convicted. removed from society and put in places where they do not pose a threat to the rest of civilised society.

Every country under the sun has places for miscreants and we would not hesitate to make use of them to protect democracy and constitutionalism values which are highly esteemed in the New Dispensation. It is understandable that, when standing before a crowd, some get excitable and experience a rush of blood to the head. We urge them to demobilize that primal instinct and deploy their faculties located in the higher centres of their brains and embrace constitutional means of opposing the Government.

We do not rule out a deliberate effort to provoke the authorities into enforcing the law so as to get negative international attention at the time when the Minister of Foreign Affairs and International Trade. Hon SB Moyo is meeting the British Foreign Minister, Jeremy Hunt: as well as the Secretary-General of the Commonwealth, Baroness Scotland to advance Zimbabwe’s Re-engagement and mainstreaming efforts.

Whilst we will not hesitate to enforce the law, we will not be baited to a predictable default synonymous with the Old Dispensation 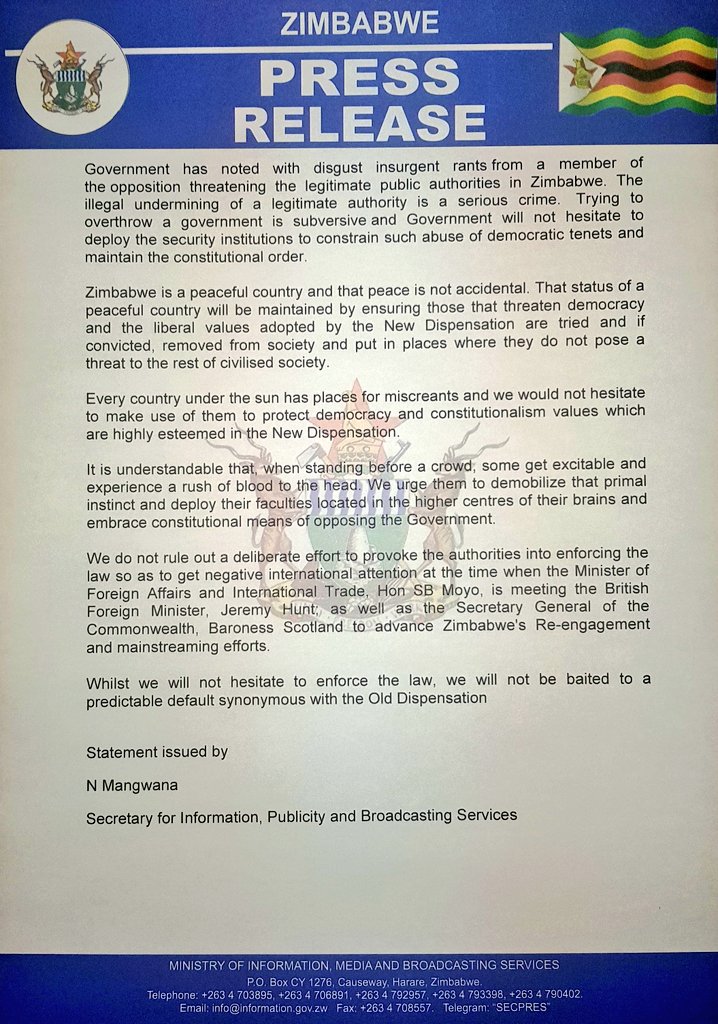