The Reserve Bank of Zimbabwe (RBZ) Governor Dr John Mangudya yesterday outlined five key measures the central bank was taking to support the newly introduced Zimbabwean dollar. The Government yesterday announced an end to the multiple currency system which was adopted in 2009.

The RBZ through Statutory Instrument 142 of 201 banned the use of all foreign currencies on local transactions.

We post below in full the measures the RBZ is putting in place to buttress the new currency.

Further to the Statutory Instrument 142 of 2019 issued by the Hon Minister of Finance and Economic Development, Prof Mthuli Ncube, on the removal of the multi-currency system in Zimbabwe and replacing it with a local unit of account (RTGS$/ZWL$) for transacting purposes, the Reserve Bank of Zimbabwe wished to announce that it will implement the following support measures to buttress and strengthen the local unit of account:

a) Direct banks to transfer to the Reserve Bank the RTGS$/ZWL$ that they are holding as counterpart funds for the foreign currency historical or legacy debt that Government, through the Reserve Bank, is assuming at the rate of 1:1 between the RTGS$ and the US$. This measure is expected to mop around ZLW$1.2 billion from the market by the end of this week.

b) Adjust the interest rate on the Reserve Bank overnight window upwards from the current 15% per annum to 50% per annum in line with the inflation trends.

c) Remove administrative limits on the operation of bureaux de change and on the cap on margins for banks for the interbank foreign exchange transactions.

d) Put a vesting period of 90 days on disposal of dual securities or shares purchased by investors on the Zimbabwe Stock Exchange.

e) increase supply of foreign currency into interbank foreign market by ensuring that a least 50% of the surrender portion of foreign currency is sold to the interbank market. This will be supplemented by the use of Letters of Credit (LCs) for the importation of essential commodities that include fuel, cooking oil, and wheat. The Bank has put in place LCs amounting to US$330 million for this purpose. 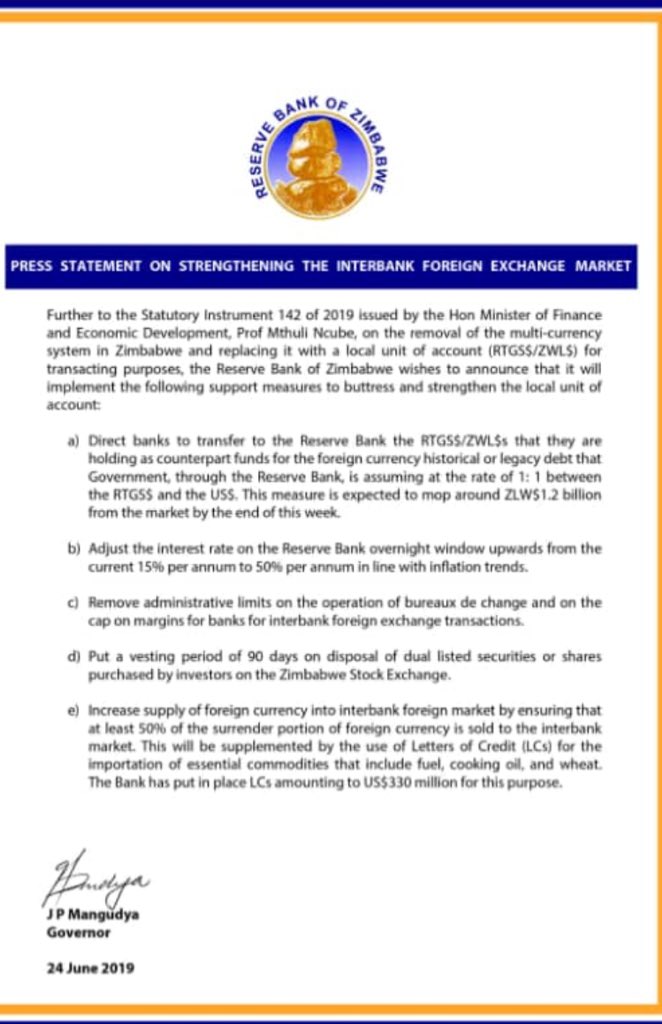