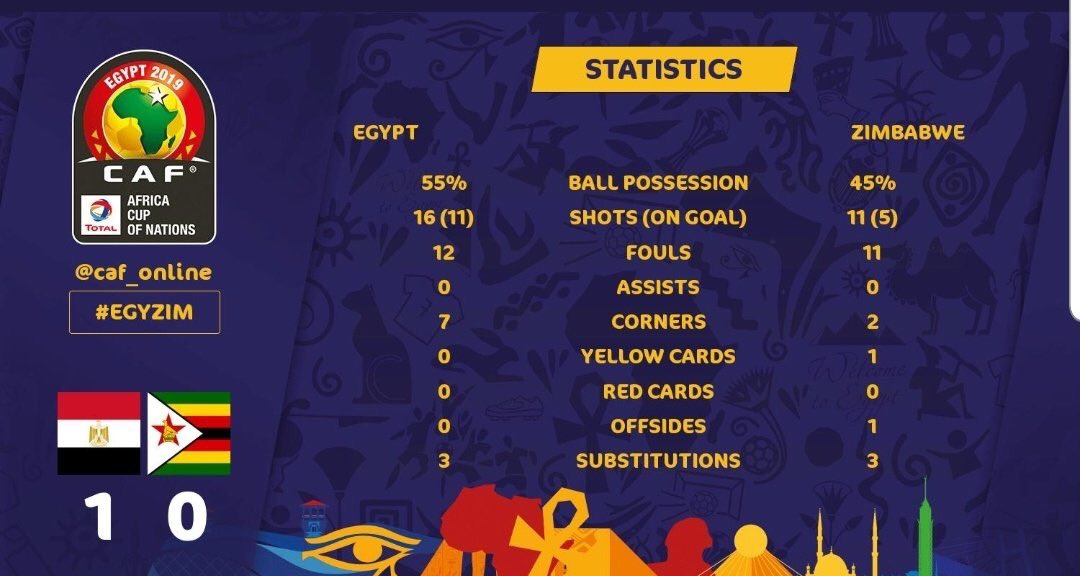 Zimbabwe lost 0-1 to Egypt in the AFCON 2019 opening match on Friday. The team was generally commended for playing well in a game that was already considered tough. Some have however felt that Zimbabwe did not play well at all.

Here are some reactions we selected:

This video is so satisfying 🙌😂pic.twitter.com/lnmEpcXpJV

Good morning folks after last nights #AFCON2019 opener must say #DevineLunga was pretty much up to the task & kept #MoSalah on his feet & in check👏🏿my message to th warriors it’s not over till the “fat” lady sings #EgyptVsZimbabwe #AFCON #TotalAFCON2019 @online_zifa (@GettyImages pic.twitter.com/ie0HycmE79

Egypt 1 Zimbabwe 0. Well done Warriors, there was some flashes of brilliance from our goalkeeper Sibanda, Lunga & Karuru. We were too cautious against an Egyptian team playing below. After their goal from Musona mistake, we should have changed to offensive & attacking play #AFCON

Well played by Zimbabwe 🇿🇼 Warriors – 🎶vakomana vekwedu vanotamba kufanana neshumba🎶. A very good performance despite that one moment towards the end of the 1st half against a top host nation. Aluta continua to the next match #EGYZIM #Afcon2019 #Afcon19 @online_zifa @AFCON_2019 pic.twitter.com/rBXXRL6ctP

You will find some Zimbabwean Dimwits who wanted their Liverpool player to score #AFCON2019! This Villager Lunga Neutralized him pic.twitter.com/k4uvywmYiB

We could have gotten a positive result out of this game had the Warriors not been told to play for @edmnangagwa by that clown called Kazembe Kazembe, or is it Kanzimbe Kanzimbe. Zimbabweans don't want anything to do with ED, the Warriors aren't exceptions.

With everything still to play for, great to see the gallant #Warriors are in it to win it. Egypt were lucky, in fact very lucky!#GoWarriorsGo pic.twitter.com/BZUF0NkBcU

Surprised by how poor Egypt were, certainly NOT the favourites on that performance

#AfricanLivesMatter The warriors with less than 500 supporters in the stadium as compared to at least 50,000 Egyptians …..And a star-studded Egyptian team ..showed character . They were let down by poor finishing .BUT their heads are certainly held up very high! Well done&sorry