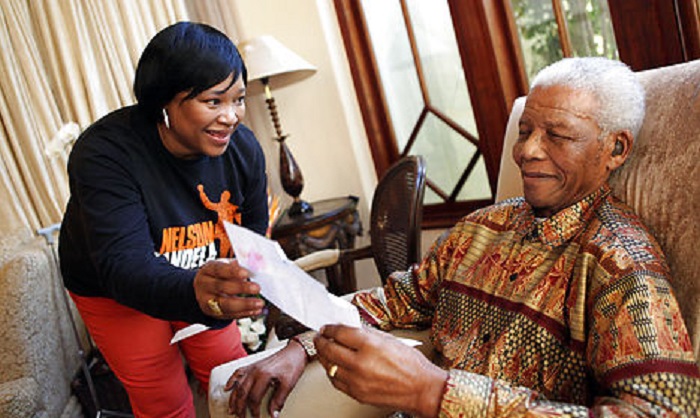 Zindzi Mandela (L), the youngest daughter of former South African President Nelson Mandela shows him a letter at his home in Johannesburg on July 17, 2010 during celebrations of his 92nd birthday. Nelson Mandela, South Africa’s first black president, turns 92-years-old, as the world celebrates the first international day in his honor. Global leaders and ordinary people in South Africa and abroad have committed to devoting 67 minutes of their time to community service, to mark the number years Mandela spent in politics. AFP PHOTO / NELSON MANDELA FOUNDATION PHOTO / Debbie Yazbek/Nelson MANDATORY CREDIT – NO SALES – RESTRICTED TO EDITORIAL USE

The EFF has come in support of South Africa ambassador to Denmark, Zindzi Mandela who is being attacked over her recent land and race tweets. AfriForum, a lobby group, has been urging the Public relations Minister to recall and fire her over the tweets.

However, EFF spokesperson Mbuyiseni Ndlozi said that the party placed its full support behind Nelson and Winnie Mandela’s daughter. He said:

No African child must ever be suppressed or even threatened with losing any job or privileges for speaking the truth about the land. The land question must be resolved for a true decolonisation of our country to happen. Without the land, political freedom is futile and will soon be a joke.  There is nothing racist by stating the correct fact that white people drove a racist project of land dispossession called colonisation.

Dear Apartheid Apologists, your time is over. You will not rule again. We do not fear you. Finally #TheLandIsOurs.

Meanwhile, the Freedom Front Plus leader Pieter Groenewald said that Mandela owed all South Africans an apology and that making such statements outside of South Africa’s borders did not indemnify her from accountability.

The ANC resolved at its Nasrec conference to have land expropriated without compensation provided it doesn’t affect food security and growth.

This is a policy which the EFF has been advocating since its inception in 2014.