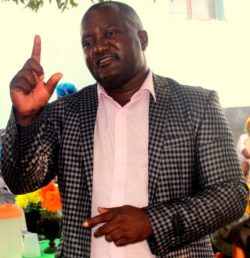 A top ZANU PF official and Minister of State for Provincial Affairs, Ezra Chadzamira, has blamed MDC leader Nelson Chamisa for causing the current hardships being experienced by the masses.

Chadzamira was speaking during Zanu PF victory celebrations in Ward 17, Chivi Central Constituency over the weekend.

He claimed that Chamisa is in bed with the “enemy” and vowed that ZANU PF will rule Zimbabwe for time indefinite. Said Chadzamira:

We are trying to better the lives of our people but this small boy (Chamisa), who is in bed with the enemy is the problem.

I will tell Chamisa today that this country will never be run by an opposition. Zanu PF will rule forever.

I want to tell all opposition supporters that there is future in Zanu PF. They should come back and join the winning team rather than be associated with losers.

Zanu PF will always rule over the opposition while they cry all the time.

Tsvangirai tried but he failed. He died before he could lead this country. What more can a little boy like Chamisa do that was failed by his mentor? He is chewing more than he can swallow.

Zimbabwe is for Zanu PF and opposition supporters will find themselves voting for Zanu PF when they get into the voting booths. That is how good Zanu PF is.

Repair of Plastic water tanks
Harare
Air Freshener with Dispenser
US $15.00 Harare
🧱 Building Material Available in and around Harare
Harare
Car radios
US $55.00 Bulawayo
Mobile Barber
US $2.00 Bulawayo
Laminator A4
US $70.00 Harare
Plumbing solutions
US $20.00 Bulawayo
Mandarin (Chinese) call in lessons
US $20.00 Harare