LABOUR ACT (CHAPTER 28:01)
In the matter between

NOTICE OF IN TO RESORT TO COLLECTIVE JOB ACTION

Be pleased to take notice that the ZIMBABWE ENERGY WORKERS UNION and NATIONAL ENERGY WORKERS UNION OF ZIMBABWE hereby give notice of intention to resort to collective job action, In terms of Section 104 (4)(b) of the Labour Act (Chapter 28:01), in defense of an immediate threat to the existence of a registered Trade Union.

The grounds for the intended action are as follows:

I. the Trade unions, ZEWU & NEWUZ and the Zimbabwe Energy Industry Employers’ Association (ZIMEA) met as the General Council, under the auspices of the National Employment Council for the Energy Industry (NEC) 9-10 April 2019 and made a resolution to the effect that the collective bargaining committee should convene and start negotiations for 2018 and 2019 by 31 May 2019.

2. Since then, the employers association is not willing to come to the table for negotiations

3. On 12 June 2019, the NEC called for a principals meeting with the objective of setting out ground rules for the collective bargaining negotiations and the employers’ association refused to commit to a reasonable date for the commencernent of the process.

4. This is despite the fact that they were fully aware of the meeting and could not seek the mandate from their principals well before so that they could come for the meeting with a position, given that all parties are aware that collective bargaining is conducted yearly.

5. Despite the urgent need to respond to the challenges facing workers, the employers chose to delay negotiations by refusing to conduct collective bargaining negotiations on the 17th June 2019 as proposed by Trade Unions but the 24th of June 2019, citing reasons which are manifestly invalid, a move that is clearly calculated to destroy the Unions given the mounting pressure from trade union members for an urgent adjustment on the June payroll.

6. In doing so, they are not taking into consideration the current economic situation and the urgent need for conclusion of the negotiations bearing in mind that we are already in midyear. They are also not considering that workers salaries have been eroded more than eight times due to the economic meltdown and that they no longer earn a living wage, nor can they afford travel to and from work with the current earnings.

7. The employers are aware that Trade Unon members expect the Trade Unions to respond with urgency where their standard of living is severely eroded, as in the current scenario yet they refuse or neglect to take the collective bargaining process seriously to the detriment of Trade Unions. Therefore Trade Unions have no option but to give notice as they hereby do, in defense of their existence.

AND TO: THE GENERAL SECRETARY
NEC for the Zimbabwe Energy Industry
48 Edmunds Avenue Belvedere
HARARE 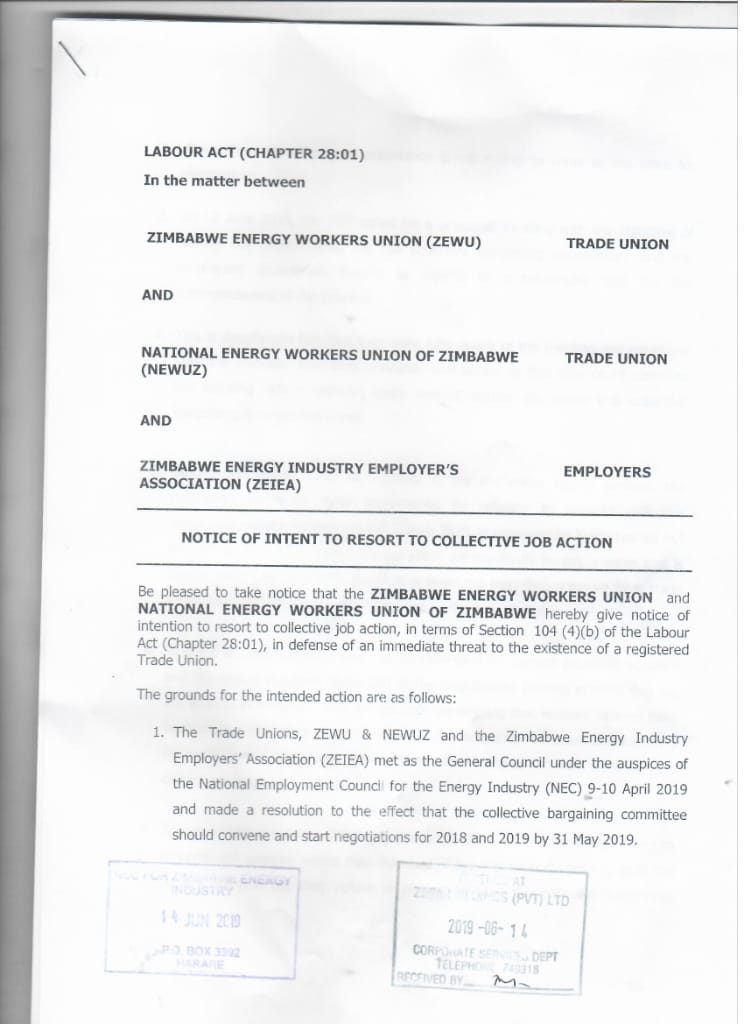