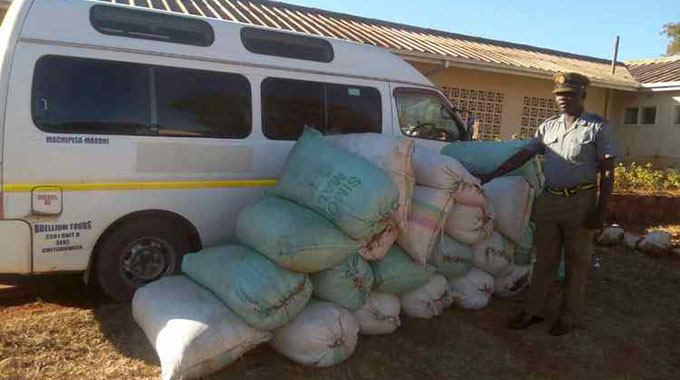 A 27-year-old man was recently arrested by police in Nyanga after he was found in possession of marijuana (dagga) weighing more than 600kg with a street value of $1 million.

The drugs were stashed in a Nissan Caravan and had been smuggled from Mozambique through illegal entry points.

The vehicle had two occupants, Tinashe Tapera who is now in police custody and an accomplice who is still at large.

Police in Ruwangwe received a tip-off from their counterparts in Mutare that there was a car which was transporting 25 sacks of 90kg marijuana from Mozambique to an unknown destination.

Acting on the tip-off, Officer-in-Charge for Ruwange, Inspector Bere assigned his subordinates led by Seargent Panketi.

They made a follow-up and intercepted the vehicle, a Nissan Caravan, registration Number AEU 8376, at Kaitano Primary School.

While at the scene, they searched and discovered the contraband.

However, the two suspects dumped the vehicle and vanished into a nearby bush.

Tapera was arrested after he attempted to bribe detectives with US$1 000 cash. He was lured into a trap and was arrested while trying to hand over the money.