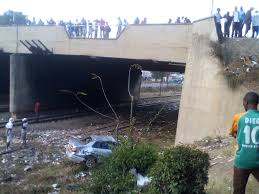 A civil engineers’ body has revealed that some of the flyovers in Harare are in a state of disrepair and risk collapse.

The engineers urged Members of Parliament to raise the issue with the relevant minister to avoid a catastrophe.

In a letter written to the Office of the President and Cabinet and copied to Parliament, Zimbabwe Institute of Engineers (ZIE) president Bernard Musarurwa said:

As engineers, we demand that MPs (Members of Parliament) take up the issue with the relevant minister. We do not want a situation where you will say this issue was never raised.

The City of Harare (CoH) engineers, together with the consultant’s engineers, inspected the three flyovers on September 21, 2006. And again, the engineers conducted another more detailed inspection on September 29, 2006.

From the two inspections, the consultant was able to ascertain firsthand the extent of defects to be able to propose the requisite intervention strategies required for the repair of the structures.

Harare City Council spokesperson, Michael Chideme said that they have written to the Ministry of Transport to attend to the problem.

Some of the structures which are now a hazard include Simon Mazorodze Road (Beatrice Road) fly-over at the interchange with Rotten Row as well as two adjacent fly-overs on Rotten Row and Lytton Road.

Template:Userspace draft Simon Charles Mazorodze(MCh.B) was a Zimbawean cabinet minister and a medical doctor by profession. He is also widely credited as one of the founders of the Zimbabwe African National Union Patriotic Front, which has been ruling the country since independence. Read More About Simon Mazorodze

Rotten Row is a road in Harare that begins at the intersection of Prince Edward Street and Samora Machel Avenue. The road runs to the flyover near Mbare where it becomes Cripps Road. Rotten Row was named when after a road in London of the... Read More About Rotten Row