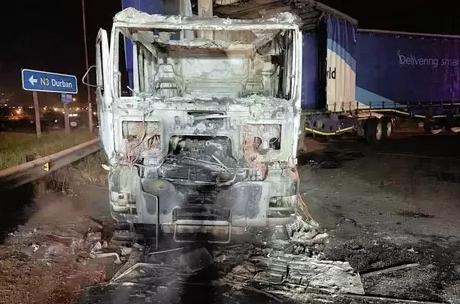 Foreign truck drivers in South Africa, among them, Zimbabweans, have described working in South Africa as a “living hell” following numerous incidents of attacks this past week and weekend. At least 15 trucks were burnt this weekend alone along the N3.

Zimbabwean driver Steven Bagadzi, a father of four from Harare, said he prayed everyday before reporting for work. He said his brother Ronald, also a truck driver, was recovering from a leg injury after his truck was torched last week in Midrand, in Gauteng.

Ronald, who works in Pinetown, had been delivering goods when he was assaulted with a baseball bat.

“We are scared to die so far away from our families. But we cannot abandon our jobs for the sake of our families. We are caught between a rock and a hard place,” he said.

Bagadzi said he was a competent driver with a licence which he obtained after he was granted asylum in 2008. He pleaded with officials to urgently address the issue before innocent people were killed.

“We understand locals are angry, but we cannot refuse job opportunities for the sake of our families. I came here to escape poverty and political war in Zimbabwe,” Bagadzi said.