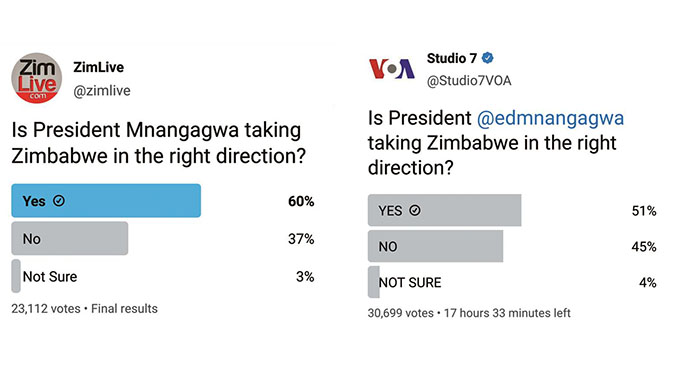 An article in the government-controlled Herald today celebrated Mnangagwa’s positive approval ratings from 2 Twitter polls run by Studio 7 Voice of America and ZimLive. Both polls showed that more than 51% of the votes approved of the direction that the president is taking the country.

Some Twitter users have however accused the president’s supporters of buying twitter votes (which apparently cost about $1 for a 100) to rig the polls.

Here are some select social media reactions to the apparent Mnangagwa victory in the “polls”:

This is desperation writ large. You rig an election, then a poll and then claim both prove your popularity in the face of monumental failure and policy delinquency. https://t.co/vsjkAprLpR

The ZanuPF activist @TichZindoga masquerading as a journalist is not even embarrassed to put this in the front page . 😂 pic.twitter.com/COHt7xu0zT

Final results. 1,151 votes over 24 hours. An account with larger reach would have more. This is also highly likely impacted by what subjects an account typically tweets about. Also, an account with different political leanings would likely see a slight difference in the results. pic.twitter.com/6M0PXxVujG

This abnormal swing clearly tells us that Zanu PF has invested in internet trolls and bots with the sole aim of trying to change the narrative about their failing leader. Their only problem is that they peaked too early, and their methods are now known pic.twitter.com/6ppc9ETFGe

The only person who can buy Twitter Votes is the person who started the poll.

Zimbabweans must learn to research.