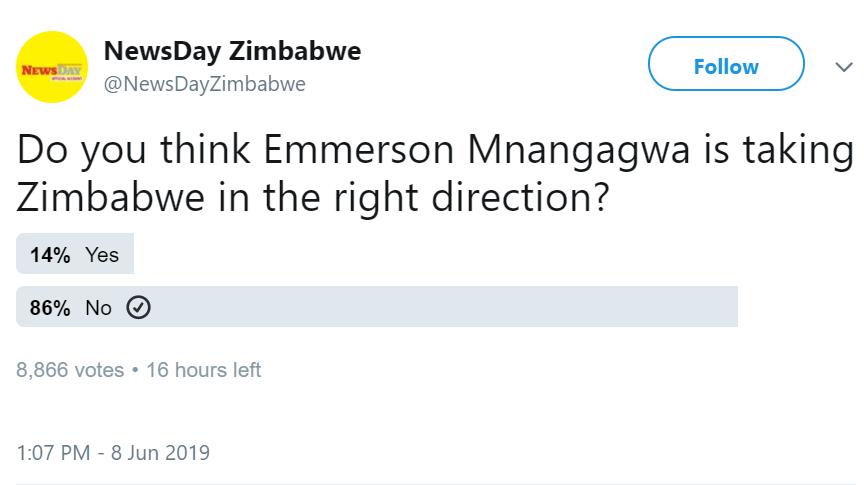 Following allegations that supporters of President Emmerson Mnangagwa bought votes to win him approval in 2 Twitter polls, daily newspaper NewsDay Zimbabwe has initiated yet another Twitter poll. The poll asks the same question asked by Studio 7 and ZimLive in previous polls:

Do you think Emmerson Mnangagwa is taking Zimbabwe in the right direction?

The poll was started in on Saturday afternoon and had received about 9,000 votes at the writing of this update. The votes are 14% Yes and 86% No. This shows a sharp departure from the other two polls where Mnangagwa got more than 50% Yes votes.

The NewsDay poll will run for 24 hours, ending Sunday around 1PM.

NewsDay is one of the most read daily newspapers in Zimbabwe, and the most trafficked online.

NewsDay is a Zimbabwean daily newspaper and online publication. It is a subsidiary of Alpha Media Holdings (AMH), an independent media house free from political ties or outside influence. AMH itself is partly owned by Zimbabwean entrepreneur Trevor Ncube. The online version of the went... Read More About NewsDay