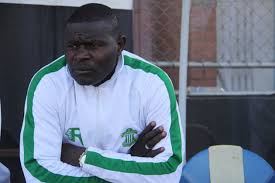 Caps United FC coach Lloyd Chitembwe has cried foul over the manner in which the match officials handled Makepekepe’s 3-1 loss to Chicken Inn.

Chitembwe was left fuming after the Gamecocks scored their second goal from a direct free kick, which he believed was unfair.

Speaking to the press after the defeat, Chitembwe said:

This is Zimbabwe, what else can you say. Referees decision is final and they are the main men.

So it’s very unfair for me to start talking about referees but I think he played a big role in that goal.

I am saying so because I thought the Chicken Inn player had a touch of the ball and most of my players are alluding to that fact.

So by virtue of him having the last touch, Chris had the right to play that ball but for other reasons known by the referee he thought otherwise and we can’t do anything but just to take the result and go home.

Chicken Inn is a fast food brand in Zimbabwe. The brand is operated by Simbisa Brands group of companies alongside other fast food brands like Creamy Inn, Bakers Inn and Pizza Inn. In 2018, Simbisa had 86 Chicken Inn francise outlets across Africa, including Kenya,... Read More About Chicken Inn