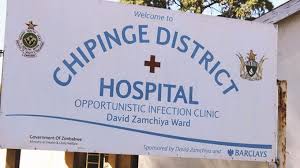 Staff members at Chipinge District Hospital reportedly stole huge amounts of drugs, with some of the stolen drugs finding their way to private institutions.

The reports of the alleged thefts were first revealed through social media and prompted the district administration to start investigations.

The Ministry of Health sent an investigating team from Harare to look into the incident, which happened several months ago.

A source at the hospital told The Herald that vital drugs were misappropriated at the facility. said the source:

The matter came to light through social media.

This was before the cyclone disaster and I am pretty sure the district administration was seized with the matter.

I am also sure that an investigation into the matter was launched although we are not aware of the findings.

Chipinge district administrator William Mashava confirmed that the allegations had indeed been made but were unfounded. Said Mashava:

Remember they came from social media and I am sure there was nothing serious as the allegations were more of clashes as a result of politics at the hospital.

There was a medical doctor Dr Makumbe who changed people within the departments after he noted that some things were not being done well.

The changes did not go down well with others, who within three or four days started raising such allegations.