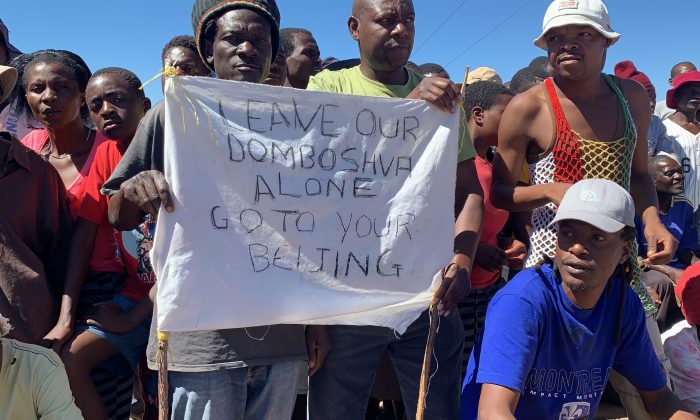 Rural communities in Zimbabwe are beginning to stand up to Chinese mining companies operating in the country.

This is shown by recent demonstrations against plans by Aihua Jianye, a Chinese company that sought to evict thousands of villagers in Domboshava to open a quarry mine.

The residents of Domboshava, a settlement a few kilometres north of Harare, staged the demonstration on May 6. One of the signs held by protestors said; “Leave our Domboshava alone. Go back to your Beijing.”

The Chinese company said that the $500 million mining project would generate 500 jobs, but the locals are not convinced.

If mining were supposed to benefit the country, why would over 20,000 people were displaced to pave way for foreign investors who will take the minerals and the profits outside the country? … who gave them the licence to mine and in exchange for what?

Our constitution is clear on fundamental rights that the citizens have, and these include environmental and cultural rights.

Taking this into account, the community has the right to say ‘no’ to destructive and unsustainable development and that right should be respected by those who are in authority.

In Manicaland, another Chinese company, Anjin Investments is returning to the Marange area, to resume diamond mining operations.

The Marange villagers are reportedly planning to hold a protest against the company, following the example of those in Domboshava.

An NGO that promotes the of marginalized and vulnerable communities in natural resource-rich areas, the Zimbabwe Environmental Law Association (ZELA), released a report in March.

Part of the ZELA reports reads:

Some of the companies that are foremost in violation of EESCRs (environmental, economic, social, and cultural rights) are Chinese mining companies.

Mountains in Chiadzwa [Marange area] are considered sacred and cultural shrines, but company officials of Chinese descent built their temple on top of one of the mountains.

… the Chinese companies violated the graves by exhuming the bodies and exposing them without carrying out the necessary cultural rights and at one point they left skeletons scattered all over, which is a taboo in Zimbabwe.